BLUEFIELD — When the House of Delegates resumed this morning, one of the bills up for third reading and possible passage — House Bill 2011 — a bill designed to modify the current interpretation of “deliberate intent” exemption in the state’s Workers’ Compensation laws.

“That bill will be up for a vote (today),” State Delegate John H. Shott, R-Mercer, chair of the House Judiciary Committee said. “There is likely to be a good deal of debate on the issue.”

The issue is part of the Republican majority’s efforts at tort reform to make the state more business friendly. Like most states, West Virginia’s existing Workers’ Compensation statute mandates that employers can lose workers’ compensation immunity if the employer puts an employee at risk of injury or death in two instances.

The first condition is if the employer acted intentionally to injure or kill an employee. The second has five components, all of which must be proved to find the employer in violation. The second component of the second condition, addressing the employer’s actual knowledge of the unsafe working condition and its risk, is the modification that HB 2011 seeks to modify.

“The bill is intended to modify the process of determining deliberate intent,” Shott said.

“Another bill that we will be taking up this week is a Human trafficking bill,” Shott said.  HB 2161, sponsored by Barbara Evans Fleischauer, D-Monongalia County titled “Adopting the Uniform Act on Prevention of and the Remedies for Human Trafficking” was introduced in the House on Jan. 20.

“It has been generating some interest… 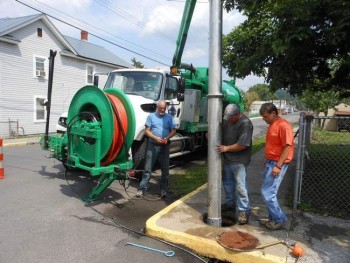 By JENNIFER GARDNER Charleston Gazette-Mail CHARLESTON, W.Va. — Tom Thiltgen wanted to be a farmer. While living in…
byDon Smith

CLARKSBURG, W.Va. — A tentative agreement has been reached in FirstEnergy’s $152-million base rate case, officials privy to…
byBrian Canterbury