Release from the West Virginia Department of Transportation:

WILLIAMSTOWN, W.Va. — A $4.3 million roundabout project to fix a dangerous intersection in Williamstown is now open.

The roundabout project was announced by Gov. Jim Justice in 2019 and paid for with Roads to Prosperity highway funds. State highway officials decided on a roundabout to address constant backups and accidents at the intersection of WV 14 and WV 31 following lengthy discussions with local officials.

West Virginia Division of Highways and local officials agreed on a traffic roundabout as the best solution to a tricky intersection that had historically been the site of major traffic backups and frequent accidents at one of the main entrances to Williamstown.

With two schools in the area and heavy truck traffic, the old intersection was a major bottleneck.

“This project highlights the way Gov. Justice’s Roads to Prosperity program is helping the Division make improvements, specifically for the safety of our residents,” said Deputy Secretary of Transportation, Jimmy Wriston. “Convenience, ease of travel, smooth surfaces to drive on, these are the things the public sees, but safety and protecting people’s lives weighs the most heavily. That’s apparent in a project like this one.”

Kelly Paving was awarded the $4.3 million contract to build the roundabout.

“It’s pretty easy once you get used to it,” said WVDOH District 3 Engineer Justin Smith said. “I have not heard one negative comment.”

Aside from landscaping, to be completed this spring, Smith said construction on the project is finished.

Instead of stoplights or stop signs, roundabouts direct drivers into a circle, from which they can exit right, continue straight ahead, or keep driving around the circle to exit to the left of their original direction or even go back the way they came. It’s harder to explain that it actually is to negotiate.

“It just all turned out beautifully,” said Jean Ford, who served as mayor of Williamstown for 23 years. “I’m so thankful that we have it. Accidents are almost nil now. I think that was the answer to what we needed.”

With work continuing in all 55 counties across the state, the West Virginia Division of Highways and the West Virginia Department of Transportation remind the public of the importance of keeping everyone safe in work zones by keeping “Heads up; phones down!” 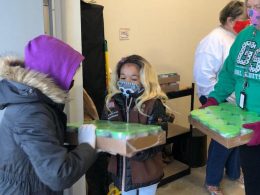 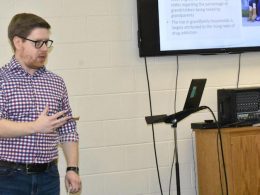