CHARLESTON, W.Va. – Governor Jim Justice leads his two challengers for the 2020 Republican primary nomination by double digits among registered likely voters, according to the latest edition of the MetroNews West Virginia Poll.

“As the Republican incumbent with two primary challengers, Governor Justice has many advantages in a primary battle,” Repass said. “First, the Governor is well known and has high name ID, while his challengers are not well known. In fact, in our poll more than 50 percent said they had heard little or nothing about Woody Thrasher, and about 75 percent had heard little or nothing about Mike Folk.”

While the Governor’s approval rating is below 50 percent (42 percent in the late August 2019 MetroNews West Virginia Poll), he benefits from high name recognition among likely Republican voters, according to Repass.

“A two candidate race would likely be more competitive. However, if the race remains as it is the two Republican challengers will need to build name ID in the run-up to the May primary, while at the same time craft a convincing narrative for undecideds and for Justice supporters to consider an alternative choice for governor,” Repass added.

The Inter-Mountain CLARKSBURG, W.Va. — Dominion Energy is inviting nonprofit organizations across the company’s footprint to apply for…
byDon Smith 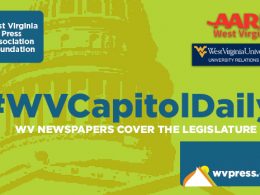 From the Wheeling News-Register: Changing a state’s entire tax structure is a laborious, time-consuming process full of pitfalls.…
byDon Smith