By Steven Allen Adams, The Parkersburg News and Sentinel

CHARLESTON, W.Va. — The West Virginia House of Delegates joined with their state Senate colleagues Tuesday in passing a bill making it clear strikes and work stoppages by public employees are illegal.

According to the roll call, 23 out of the 76 Republicans who voted on the bill voted against it, joining the 23 Democrats who voted in a solid block against the bill.

WVU Today MORGANTOWN, W.Va. — Evan MacCarthy, assistant professor of musicology in the School of Music, has been named…
byDon Smith 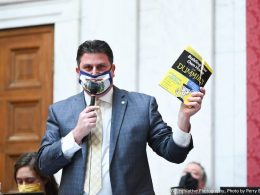 By JAKE ZUCKERMAN Charleston Gazette-Mail CHARLESTON, W.Va. — Before they were at each others’ throats, the three front-running…
byDon Smith