By Steven Allen Adams, The Parkersburg News and Sentinel

The committee recommended Senate Bill 275, creating the West Virginia Appellate Reorganization Act, for passage in a 17-8 vote, but not before approving a committee substitute for the bill.

SB 275 would create an intermediate court of appeals between the circuit courts and the state Supreme Court of Appeals.

The Senate’s version of the bill would create two three-judge panels split between a southern and a northern district. The House Judiciary Committee reduced it to one three-judge panel serving the entire state, though the appeals court would be able to travel around West Virginia to hear cases…

Release from the Education Alliance: CHARLESTON, W.Va. – More than 400 business, community, and education leaders from across…
byDon Smith

From the Parkersburg News and Sentinel, W.Va.:  …In West Virginia, a request has gone out from the governor…
byDon Smith 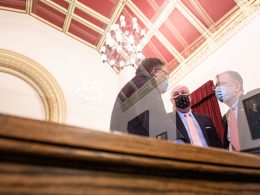