Likely Senate president hopes economic issues, not social, will be focus of session

BECKLEY, W.Va — Sen. Mitch Carmichael, the odds on favorite to be the new Senate President when the 83rd Legislature convenes in 2017, says he hopes economic issues, not social issues, will command lawmakers’ attention.

Carmichael, R-Jackson, said he wants the agenda to focus on the state’s economy, saying lawmakers have previously spent too much time discussing social issues.

The Religious Freedom Restoration Act, championed by the Republican House and opposed by some lawmakers as a divisive and discriminatory measure, was hotly debated and ultimately defeated in the Senate on a 27-7 vote in 2016, with Carmichael voting for it.

While the debate ragged in both chambers, a troubled budget was left to an eleventh-hour fix that Gov. Earl Ray Tomblin vetoed.The legislature then went into a 17-day special session, costing taxpayers roughly $39,000 a day, to produce a budget that could pass both houses of the legislature and get the governor’s signature.

“For too long in the legislative chambers and the executive branch, we’ve focused on issues that have taken us away from our central point,” Carmichael said. “We have taken our eye off the ball and adhered to special interest groups.”

To Gov.-elect Jim Justice’s thinking, RFRA would do economic damage to a state that needs just the opposite. In a sit-down editorial board meeting in May, Justice said, “From a nuts and bolts standpoint, we see exactly what’s happened in Indiana and North Carolina and (RFRA) would have been very damaging to our economy … We’ve got enough problems we don’t need to be doin’ that.”

In the last legislative session, Sen. Corey Palumbo, D-Kanawha, had made an amendment to the bill specifically about nondiscrimination, which allowed municipalities in the state to uphold non-discrimination ordinances.

Carmichael previously gave a passionate speech in favor of the amendment. It passed, 23-11.

“I believe we need to value the human dignity and goodness in people,” Carmichael had said when he spoke in favor of the amendment.

Sen. Jeff Mullins, R-Raleigh, and Sen. Sue Cline, R-Wyoming, did not respond to phone messages and emails seeking comment about the focus of the session and the possibility of the topic being raised in the upcoming session.

Sen. Ed Gaunch, R-Kanawha, who decided against challenging Carmichael for leadership of the Senate, says he agrees with focusing on the budget unless a majority of West Virginians want to talk about social issues.

“It wouldn’t be my priority,” he said of social issues. “We ought to be representing the focus of folks who sent us up there, though. It depends on what the folks want to talk about. We need to fix the educational system and address the drug epidemic in society. We need to fix the tax structure. All of these things are greatly important, but I don’t think the Legislature can create jobs but we can create an environment where jobs can be created.”

Gaunch conceded the race for Senate President to Carmichael last weekend. The caucus will meet Dec. 4 during legislature  to vote on its nominee. On the opening day of session, Jan. 11, the Senate will gavel in and select a president from candidates for both major parties, a vote the Republicans will win since they hold a 22-12 seat advantage. Legislators will then go home for a month and reconvene Feb. 8 for the first day of session.

Metro News was reporting that conservative Democratic Sen. Roman Prezioso expects to be the next Senate minority leader.

West Virginia has a raft of problems that won’t be fixed overnight. The state unemployment rate rose in October by two-tenths to 6.0 percent with 90 percent of counties following that trend, according to WorkForce West Virginia unemployment data released this week.

The state also has the lowest workforce participation, highest disability rate, is the least educated, is the most unhealthy and it’s losing population, according to data from political and economics observers recently presented at the New River Gorge Regional Economics Summit.

In Carmichael’s view, regulatory schemes and the tax structure are at least partly to blame for the state’s economy.

“Most of that is there is a regulatory scheme in place in West Virginia,” Carmichael said. “We have been judged more onerous than other states. That costs jobs. We want reasonable regulations and we want to accommodate those who are creating jobs with tax structure and capital formation. The tax on capital is too high and that drives jobs away.”

For balancing the budget in the current economic climate, Carmichael said lawmakers have some hard choices to make.

In the next legislative session, there will be an estimated $300 million revenue shortfall. Gov. Earl Ray Tomblin recently announced a 2 percent across-the-board mid-year cut to the state budget with a continuation of the hiring freeze.

The nearly $60 million cut would affect most government agencies. Tomblin previously said the state’s general revenue fund has come up $87 million short of revenue projections through the first four months of the budget year.

And Tomblin previously has said there is no end in sight to falling revenues.

Carmichael said one thing he wants the finance committees to look at is creating a “proper size of government,” saying the state has “more government than we can afford.”

“We are not looking to cut people’s positions as much as we are consolidating through attrition,” he said. “We want to run the government more efficiently. There are lots of vacancies and we want to do this in the least disruptive manner for citizens and their lives.”

“Our revenue is declining,” he said. “Our governor needs to come forward with revenue estimates. That’s his constitutional responsibility. The last several years, revenue estimates have been half a million dollars short, then you have to make cuts mid-year like the governor had to do.”

West Virginia ended the 2016 fiscal year with a balanced budget due to reallocations, a cigarette tax and the Rainy Day Fund. However, revenue streams have been declining, missing projections by $87 million through the first four years. Some political observers have said citizens can expect the same solution this year as well as taking more money out of the Rainy Day Fund.

Carmichael, however, said the state can’t keep looking to the Rainy Day Fund to solve the financial situation and echoed Justice’s sentiments of growing out of budget woes.

“We have to balance this government’s revenue with expenditures,” Carmichael said. “That’s what people have to do every day with their own families and it’s incumbent upon us to do it. We can’t keep dipping into savings accounts. The best thing we can do is to get the economy going.”

Carmichael also said he wants to look to grow other industries and not just focus only on fossil fuels.

“We want to re-energize fossil fuel energy but we also want to focus on jobs for all West Virginians, not just a specific industry but all,” he said.

See more from the Register-Herald.com 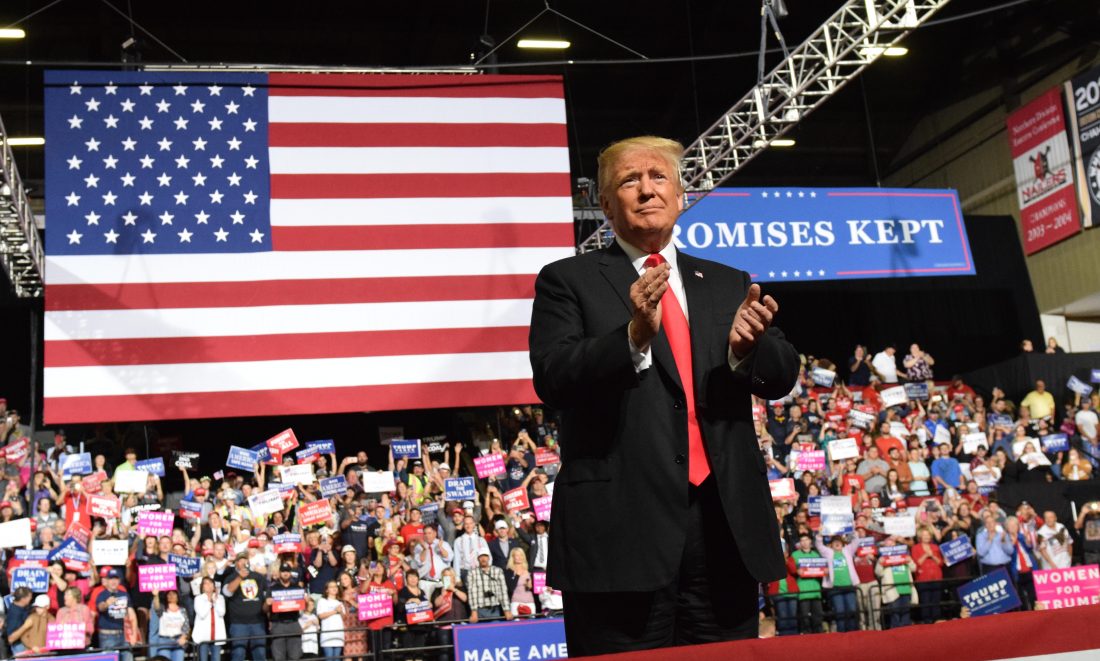 By MIKE JONES, The Intelligencer of Wheeling WHEELING — President Donald Trump will make his second visit in…
byDon Smith