“We have now been approved by all three agencies … to where our bond ratings stay exactly — exactly — what it has been in the past,” he said. “That’s terrific news because, for all practical purposes, we’re AA stable and that’s so good it’s unbelievable.”

This puts the state in a favorable position ahead of its next offering of bonds from the Roads to Prosperity initiative, Justice said. 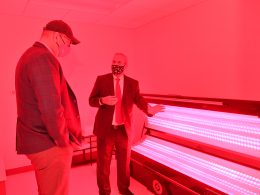 The need for speed and science: Virgin Hyperloop to benefit from WVU neuroscientists’ expertise on brain, body impacts

From WVU Today: MORGANTOWN, W.Va. — Before the first Virgin Hyperloop ride takes off, the brains behind pioneering neuroscience…
byDon Smith

By TRAVIS CRUM The Herald-Dispatch HUNTINGTON, W.Va. — There have been several manufacturing companies interested in purchasing a…
byDon Smith