The governor’s appointment is effective immediately.

The West Virginia Supreme Court ruled Friday that a Republican had to be appointed to fill the State Senate vacancy. Prior to Cline’s selection,  Tomblin’s office issued the following statement: “Gov. Tomblin has said throughout this process that he will abide by the court’s ruling, and based on the decision issued Friday, he will appoint a Republican from the list submitted to him.”

Cline has worked at Century 21 First Choice Realty in Beckley for 14 years and has been an active member in her local community. She has served as vice president of the Pineville Area Chamber of Commerce and has been a member of the Convention and Visitors Bureau board for Wyoming County, the Wyoming County Planning Commission and the Great Eastern Trail board.
Cline, who lives in Brenton, was married to the late Bob Cline for 48 years. She is the mother of two children, Joshua Cline and Carla Cline Thomas, and has four grandchildren and two great-grandchildren.
In related statements on the Supreme Court ruling:

“The state Supreme Court upheld the rule of law today. The court agreed with my office’s opinion that the statute is clear and should be applied without regard to partisan politics.”

“We appreciate the time and care of the Court in its efforts to interpret this crucial piece of West Virginia Code, and the decision made today to maintain conservative Republican representation for the citizens of Wyoming, Raleigh and McDowell Counties.

We look forward to the Governor’s appointment of one of our three qualified nominees and for them to be seated by the Senate as soon as possible.

The business of the State must be done. Any further delay will hamper our State’s budding comeback story from eight decades of Democrat damage to our population and economy.

We pray that our new Senator and all elected officials have blessings upon them as they seek to move this state forward again.”

— West Virginia Democrat Party Chair Belinda Biafore’s statement on the Supreme Court’s Ruling:
“We respect the voters, the law, and the Constitution. We respect the decision made by the WV Supreme Court of Appeals and we hope that the voters of the 9th Senatorial District get the representation that they deserve.
We thank Governor Tomblin, the WV Supreme Court of Appeals, and the members of the Democratic Committee of the 9th Senatorial District for their time and efforts.
We are as capable and committed as ever of moving our great state forward and supporting our working families to make sure that they have all of the tools they need to pursue their potential in our beautiful Mountain State. We will continue to work to ensure that the people’s voice is heard. “ 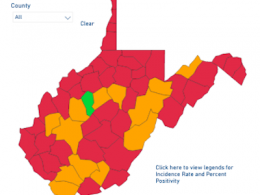