Although they are used as symbols of governments and organizations, flags viewed differently by certain professionals. Instead, some view flags as sentinels of history that should be preserved.

Cathy Heffner, president of Textile Preservation Associates Inc. in Ranson, is one such person. She is a textile conservator who specializes in preserving flags.

“When they first come in or afterwards I can be interested in where they were,” Heffner said of the flags she’s preserved over the past 30 years. “But I can’t worry about where it was, whether it has blood stains on it. When I’m working on them I have to look at them as materials. This is a piece of wool — a piece of cotton. I have to focus on the object itself. I do what’s right for that.

“I treat them all the same and I treat anything anybody brings to me,” Heffner said. “We have treated Japanese flags, Nazi flags. We treated a Fallujah banner that was held in a house where they tortured Americans. Part of me said, ‘I can’t do this.’ But another part of me said, ‘I have to do this. I’m a conservator.’

“Another part of me — the part of me that touches on the whole controversy with the Confederate flag — says, ‘We can’t let that not be seen.’ There’s a difference in showing it on a public or state building or in a museum setting. We can’t forget that history.”

John Coski, historian at the American Civil War Museum in Richmond, Va., and author of “The Confederate Battle Flag: America’s Most Embattled Emblem,” points out in a YouTube video that the flag now referred to as the Confederate flag started out as the battle flag of what became Robert E. Lee’s Army of Northern Virginia. During the war it became the most important symbol of the Confederate nation.

The flag took on a political meaning in 1948 when supporters of dissident Democrats, the so-called Dixiecrats, displayed the flag and “people consciously, purposely used it as a symbol of white Southern resistance to the federal government’s attempt at racial integration in the South,” Coski said.

“It was in the same period we see the beginning of the flag’s toxic use by the Ku Klux Klan and other extremist groups,” he said.

Although the meaning of flags may change over time, conservators like Heffner remain focused on preservation.

She has preserved flags, uniforms and other historic textiles, modern fiber arts, samplers, quilts and decorative arts for many clients, including the American Civil War Museum and 17 states, including West Virginia, Ohio, Kentucky, Pennsylvania and Maryland.

Charles Morris III, director of museums in the West Virginia Division of Culture and History, said of Heffner’s company, “What they preserve are among the most fragile pieces in a museum’s collection.

“A lot of people think the main point of a museum is to exhibit. It is actually to preserve.”

Items Heffner has preserved for West Virginia include flags on display in at the Culture Center in Charleston and at Independence Hall in Wheeling, as well as quilts and clothing. Among the items she preserved that are on display in Charleston is a coverlet Sara Rumsey made in 1793 for her wedding. Sara Rumsey was the daughter of James Rumsey, credited by some as the inventor of the steamboat.

Heffner’s days are spent leaning over large tables covered with rare flags and other textiles. The work often requires the use of magnifiers or a microscope.

Her first task is to understand the item. Heffner produces a report which includes a scale drawing of the item that shows any missing areas, an analysis of the materials of which it is made, a description of how it was constructed, and its condition.

The information is often a closely guarded secret. That’s because some flags are so valuable that fraudsters try to reproduce them and pass them off as originals.

Flags in good condition may need nothing more than a vacuum cleaning to get rid of any soil and loose debris. They may then be put in a pressure mount so they can be hung on a wall.

Pressure mounts are a specialty Heffner’s predecessor learned about while working in Switzerland. The mounts employ ultraviolet-filtering Plexiglas with aluminum frames. The frames press the fabric against a padded panel of archival-quality, acid-free material.

Wool flags are susceptible to insects. Linen and cotton flags degrade over time and become acidic. Silk flags have a tendency to break up and can turn to powder.

When flags are made of multiple materials, the materials expand and contract at different rates. Flags are two-sided. Some are adorned with paintings on both sides. Some have different paintings on each side.

Heffner often plays detective. One example: White stripes on old U.S. national flags often are the first to degrade. Why? “We believe they used some kind of bleaching technique on the fabric to make it whiter.”

She points to one U.S. national flag with white stripes that are pink. “The blue dyes were very stable but the red dyes were not,” Heffner said. “So you’ll often see this pink, bleeding into the white. Most of this happened while the flag was out in the field getting wet.”

Sometimes Heffner gets a box filled with shreds of cloth and a note   with the owner’s best guess about the contents.

“Our job is to put the jigsaw puzzle together,” she said. “That is my absolute favorite thing to do. Nothing is too daunting. I like a challenge — something nobody else would want to tackle. It’s a joy to sit there and say, ‘Oh my God, where does this go? How did this fit together? What can I learn?’

“You become familiar with all of the nuances of the fabrics. ‘There’s a thread right here that’s thicker than the rest so that must be where this piece goes because it has that thread, too,’ or, ‘Look, there’s a slight yellowing of the fabric over in this corner. All of those pieces must go there.’

“When there are painted pieces I often tell people, ‘It’s like taking a 5,000-piece jigsaw puzzle, taking all of the pieces out, breaking them into pieces, throwing half of the pieces away, and then putting them back in the box and taking the picture away so you don’t know what it was supposed to look like.

It also can be expensive. “A flag that doesn’t require a lot of treatment can easily take 50 to 100 hours of work” to preserve, Heffner said. A six-foot by six-foot flag with serious problems “can easily take hundreds of hours.”

More than 60 flags owned by the American Civil War Museum — over 10 percent of the flags in the collection — have been successfully preserved, said Cathy Wright, curator.

“Some of the flags have amazing — even heartbreaking — stories behind them,” Wright said. “Now that they’re conserved, we can put them on exhibit and the potential for them to share those stories is so much greater. They have the opportunity to connect with people and have those moments of really strong interpretation that museums are always going for.

“It’s really amazing to think of the young men who fought and in some cases bled or even died beneath them,” Wright said. “You think of the sacrifices that were made that the flags must have witnessed. They really are the silent sentinels of history.”

The museum is happy to schedule research appointments for people who want to view flags that are in storage, Wright said.

“We do a number of appointments for people who are descended from soldiers who served in those units,” she said. “Sometimes those soldiers were killed in battles or those flags were captured. Those are very emotional.

“I’ve also done appointments for people who are descended from Union soldiers who may have captured those flags.

“Just a few weeks ago I did an appointment for a woman who lives in Maine. Her ancestor was a soldier from, I believe New Jersey, who captured a flag on the way back from Gettysburg. It was really special for her to bring her very young grandson. They had been talking about the Civil War and visiting battlefields on their drive down from Maine. And then to be able to see the flag, and know their ancestor saw that very same flag and what it meant to him to be on the side that captured it. It was very special for them — and for us.”

Heffner said, “From my perspective, all of history deserves to be saved. All of it was or is or will be important to someone.” 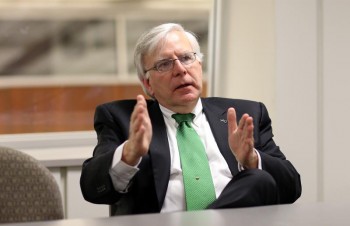 Marshall board commends its longtime president

HUNTINGTON, W.Va. — Almost one year after a vote of “no confidence” from faculty, Marshall University President Stephen…
byBrian Canterbury

BECKLEY, W.Va. — West Virginia is among several coal-producing states pressing coal companies to prove they have the…
byDon Smith