Book tells story of time before and after Monongah mine disaster

3 minute read
Pictured is the opening of the No. 6 mine in Monongah (Submitted photo)
Total
0
Shares
0
0
0

By MICHELLE DILLON and KELSIE LEROSE

An author has released a book set during and after the Monongah mine disaster.

Judith Hoover has written “Beyond Monongah,” published by Archway Publishing.

“Beyond Monongah” tells the story of a coal mining family’s struggles for survival in the early 20th century. The family is touched by labor unrest, the fiery speeches of Mother Jones, the devastation of World War I, the Spanish flu pandemic and the Monongah Mine disaster, according to an Archway Publishing press release.

Aftermath of the Dec. 6, 1907 Monongah Mine Disaster was felt all over the United States. It remains today as the deadliest mining disaster in American history to date.

The Program Advancing Community Employment (PACE) group has been working since November 2015 to design a project in memory of the miners. A memorial currently stands to commemorate those who died in the blast.

Hoover was born at Haywood Junction, about six miles from Monongah. Her father worked at the Owings mine in Shinnston, she said.

She lived at Haywood Junction until she was 15, when she then moved to the western part of Kentucky. Currently Hoover lives in Russellville, Kentucky, she said.

She has been a college professor her whole adult life. She has a doctorate in communications. She has mostly published articles for tenure and she has written textbooks, Hoover said.

“Beyond Monongah” is Hoover’s first novel.

“I think I’ve wrote this book all my life, really,” Hoover said. “What I wanted to do was tell the story of families that were affected by the Monongah disaster in 1907 and how they went on with their lives after that. It’s loosely based on my grandparents. So it’s part family history and part historical fiction. My grandfather did not work at Monongah but he did begin work at the age of 8 in the mines.”

Hoover put her family as characters in the book in Monongah and let them deal with the disaster and move on from there, she said.

Hoover read everything she could find online and in books, especially the book “Monongah” to find out information about the disaster. She also grew up in mining country, so she has been in mines with her father. She knew how people dealt with mine cave-ins and explosions, she said.

“My grandfather had (cave-ins and explosions) come up in his life,” Hoover said. “He survived it and lived to be 73 years old, which is amazing,” she said.

Hoover also did research on mining life and the history of WWI, the Spanish flu pandemic, Mother Jones and all the kinds of things that happened to people at that time in the United States, she said.

Many of the casualties of the Monongah mine disaster were Italian and Polish immigrants, and she noted this in her book.

Hoover read stories and accounts online to try to make her portrayal of the disaster realistic, she said.

The following excerpt from the book describes part of the Monongah mine disaster: “Those who had lived through the explosions and fires soon died from the gas, some covering their heads as best they could as if to ward off the inevitable. The waiting families clustered on the hillside, even as the December snow began to fall, knew nothing of the agony of their fathers or brothers underground perhaps trying to scribble a note on paper or carve a message onto the tunnel wall, hoping and praying for rescue, but realizing that such a miracle could never happen.”

“Beyond Monongah” is available at Amazon and Barnes and Noble.

The regional bureau of The Associated Press, shares 10 things you need to know Tuesday, May 22, 2018.…
byDon Smith 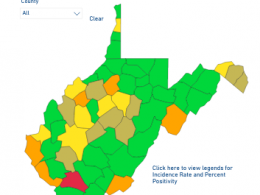