CHARLESTON, W.Va. — The regional bureau of The Associated Press shares 10 things you need to know Tuesday, Oct. 8, 2019. Look for full stories on these late-breaking news items and much more in West Virginia newspapers.

The president casts his decision as fulfilling a campaign promise, but critics say he is sacrificing a U.S. ally and undermining American credibility. Turkey, meanwhile, says it won’t bow to Trump’s threats on its military intentions.

A whistleblower’s complaint and text messages released by another envoy portray Gordon Sondland as a potentially important witness to allegations that the president sought to dig up dirt on a rival in the name of foreign policy.

4. WHERE THERE’S AN EFFORT TO SAVE LIONS

Tanzanians are trying to head off retaliatory killings on the endangered species by helping to safeguard the domesticated animals on which the big cats prey.

The cases are the court’s first on the issue since the retirement of Justice Anthony Kennedy, a voice for gay rights, and his replacement by the more conservative Brett Kavanaugh.

Carrie Lam says the Chinese military could step in if an uprising for democratic reforms that has rocked the city for months “becomes so bad,” but reiterates the government still hopes to resolve the crisis itself.

9. WHO WON NOBEL IN PHYSICS

Three scientists are acknowledged for their contribution to the understanding of the evolution of the universe. 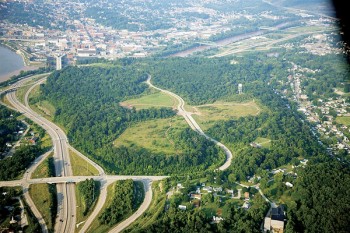 PARKERSBURG, W.Va. — Construction will start next year on the housing and hotel components of a multi-million-dollar development…
byBrian Canterbury

By BRAD JOHNSON The Inter-Mountain ELKINS, W.Va. — A Virginia woman who is riding the 600-mile route of…
byDon Smith