Moore’s casket will be taken to the Northern Panhandle today for a visitation from 5:30 p.m. until 7:30 p.m. tonight at Grisell’s Funeral Home in Moundsville. Funeral services at Saturday at Simpson United Methodist Church in Moundsville.

From the Charleston Daily Mail:

Capito confirmed her father’s death in an email.

“Dad loved the state of West Virginia as if it were a member of our family,” Capito said in a statement late Wednesday. “Serving West Virginians was at the core of his very being and he cherished every moment of it.”

She goes on to say she and her siblings, Lucy Moore Durbin and Arch A. Moore III, would “miss his warm embraces, beautiful smile, sky blue eyes and words of encouragement.”

“We are deeply saddened to say goodbye to our loving father, but we take solace in the knowledge that he is at home with the Lord, and reunited with our beloved mother in Heaven,” Capito said.

Ever a polarizing figure, Moore is revered as a campaign miracle worker, a Republican repeatedly able to win Democrat strongholds. But he is also remembered for a stint in federal prison in the early 1990s for mail fraud, extortion, obstruction of justice and income tax violations.

Moore was a hands-on governor and a non-ideological pragmatist. Moore will also be remembered for public works projects that he loved and pushed for, like building the Culture Center, expanding the interstate highway system and, for the first time, putting gold leaf on the Capitol dome.

Gov. Earl Ray Tomblin, a Democrat, was in the state Legislature during part of Moore’s administration. He praised Moore for his ability to work with lawmakers of both parties.

“Governor Moore was a towering figure in West Virginia who during his three terms worked with both Democrats and Republicans to accomplish many things to help move our state forward,” Tomblin said. “I enjoyed working with him during my legislative career and appreciated his ability to negotiate and find common ground. Joanne and I extend our sympathies to Senator Shelley Moore Capito and the entire Moore family.”

“His entire life was dedicated to our state and nation. With his daughter Senator Shelley Moore Capito’s swearing-in to the United States Senate, Governor Moore lived to see his legacy reach the highest ranks of our republic,” Lucas said in a statement. “The man simply known as ‘Arch’ to all West Virginians was so much more than any other elected official has ever been to our state. He was a statesman, soldier, patriot, leader and a legend.

“No one who met Governor Moore will ever forget the impact he had on them individually or our state as a whole. Governor Moore often faced incredible political odds and showed what was possible. Governor Moore was a master legislator and executive and will always be remembered as someone with perhaps the greatest political skills in West Virginia history.”

Lucas said the party stands with “the first family of the West Virginia Republican Party” in mourning.

“Our hearts go out to Senator Capito and the entire Moore family,” he wrote. “We love them all and will forever miss Governor Arch Moore.”

“Gayle and I are truly saddened to learn of the passing of Governor Arch A. Moore,” Manchin wrote. “We send our deepest condolences to our friends Shelley, Lucy, and Arch III as well as their families as they go through this difficult time.

“Arch was a true political force in West Virginia. Gayle and I join all West Virginians in keeping the Moore family in our thoughts and prayers during these painful days of mourning and memory.”

As governor, Moore worked 13-hour days, according to a history of West Virginia governors by Charleston newspaperman John Morgan.

Moore made most major announcements — especially of good things — himself. He personally signed all of his outgoing mail.

Moore is also thought to be the first governor to argue a case before the state Supreme Court.

His first term as governor began in 1969 when Moore was 45 years old. It was a term punctuated with “sudden and sustained bursts of executive authority,” Morgan wrote.

Moore benefited from the 1968 Modern Budget Amendment. The amendment gave the governor the sole authority to estimate revenues and prepare the budget, a duty that had once been left up to a collective of state officials.

When he won reelection in 1972, Moore was the first West Virginia governor to do so in 100 years, thanks in part to a constitutional amendment adopted in 1970.

It was a race he won despite a two-to-one Democratic advantage and despite taking on then-Secretary of State Jay Rockefeller, one of the rising stars of the Democratic Party.

That’s an image that would be challenged the rest of Moore’s career.

During his second term in 1975, Moore and his campaign manager were indicted on charges of extortion, making Moore the first sitting governor in the state to be charged with a crime. Both were later found to be not guilty.

During the same period, Moore brokered a still controversial deal with the Pittston Coal Co. after its dam broke on Buffalo Creek in Logan County killing 125 people and costing 4,000 their homes.

The state sued the company for $100 million. But Moore negotiated a $1 million settlement. The state ended up paying the federal government $9.5 million in clean-up costs and interest.

But the blemishes and questions didn’t hinder Moore from winning an eventual third term.

Moore had to sit out the 1976 race and lost in 1980 after Rockefeller spent about $12 million. During that race, Moore’s campaign criticized Rockefeller with bumper stickers that said, “Make him spend it all, Arch.”

Moore returned to the governor’s office after he beat Democrat Clyde See in 1984 to win an unprecedented third term.

At the beginning of Moore’s third term, the state had the highest unemployment rate in the nation due to a recession in the coal industry, according to West Virginia State Archives. Moore expanded corporate tax credits to attract businesses. In addition, the Legislature reduced the amount coal companies were required to pay into workers’ comp.

After he left office, Moore was indicted again. This time around, the charges stuck.

He was eventually convicted of mail fraud, extortion, obstruction of justice and income tax violations. He was sentenced to five years and 10 months in federal prison, though he ended up serving about three years.

He served part of the time at the 850-prisoner Maxwell Air Force prison camp near Montgomery, Ala. There, he was prisoner No. 02928-088.

Another part, he served on home confinement.

Moore was released in 1993 after completing about 36 months of his sentence.

At his sentencing hearing in the summer of 1990, Assistant U.S. Attorney Joe Savage said, “It is hard not to admire the intellect, determination, resilience, the sheer endurance and force of personality that is Arch A. Moore Jr.

“But it is likewise impossible not to loathe the duplicity, the greed and the unparalleled corruption perpetrated by this same man,” he continued.

“This is the real Arch Moore,” Savage said.

Arch Alfred Moore Jr. was born in Moundsville on April 16, 1923, the first of three children.

As a first grader, an acquaintance of his father asked Arch Jr. what he wanted to be when he grew up.

“I plan to be governor of West Virginia,” Arch Jr. said, according to his biography, “Arch: The Life of Governor” by Brad Crouser.

Moore joined the Army during World War II, 25 years to the day after his father signed up for World War I.

In November 1944, during a battle near Aachen, Germany, a machine-gun bullet hit Moore, then an infantry sergeant, in the face. It broke his jaw and almost severed his tongue.

“Moore lay on the soggy, wintry-cold German beet field, with his face torn apart and severe blood loss, for several hours that day,” according to his biography. “At some point, his two decades of life flashed in front of him, as if he was going to die.”

Several oral and facial surgeries later, Moore spent the better part of a year learning how to speak again.

Then he went on to West Virginia University, which was being flooded with other veterans on the GI Bill and returning from the war.

There, Moore studied political science in preparation for law school but quickly became one of the most heavily involved and popular students on campus. According to the biography, Moore wrote the student body constitution and helped lobby for the state’s first medical school to be built in Morgantown, which it was.

And there Moore met his future wife — Shelley — on a double date.

Moore was hanging out in a dormitory one summer day when his buddy asked about his evening plans. Moore’s schedule was blank.

The friend told him, “I’ve got a date. Why don’t I call her and ask if she can find someone else to go with us to the Metropolitan Theatre and then grab some sandwiches?”

“If you can put that together, that’s fine,” Arch said. “I don’t know anybody around here.”

That night, Shelley wasn’t supposed to be his girl. Arch’s date was a beauty queen. Shelley was going out with his buddy.

But Arch and Shelley expressed more interest in each other that night than in their own dates.

The couple long lived in the same Glen Dale house they built in 1954.

Moore ran for House of Delegates from Marshall County in 1952. He served one term then took at shot at Congress, losing in 1954 to Rep. Robert Mollohan, father of former Rep. Alan Mollohan.

Because Moore and his wife didn’t view the congressional win as anything permanent, Moore lived out of a hotel room when he had to be in Washington and his wife stayed in Glen Dale.

But Moore won and won again until he decided to run for governor in 1968. He benefited in that race from the indictment on Valentine’s Day 1968 of former Democratic Gov. W.W. Barron and five other men on charges of bribery and conspiracy involving state contracts.

Restoring trust was a theme Moore built on in his first inaugural address.

“Through public trust, we must provide a fresh stimulus for improved government. Society is built upon trust, and without trust, there can be little more than discouragement,” Moore said. “Without trust, hope is small and we must understand distrust and progress are incompatible.”

Moore spent part of his later years attempting to repair his reputation.

He mounted unsuccessful attempts to withdraw his guilty pleas, alleging both times that he had an incompetent lawyer. In 2003, the state Supreme Court ended Moore’s five-year quest to get his law license back. The court said Moore, then 80, wasn’t rehabilitated.

Although Moore had done a variety of volunteer work since going to prison, Moore’s refusal to acknowledge his guilty hobbled him before the court.

“To some, that place should be so high that Governor Moore would be regarded as the greatest West Virginian of all times,” Whisker wrote. “To others, his detractors, most of whom hated Moore long before he ran afoul of the law, there is no place that be named in this world that is sufficiently low.”

“My own guess,” Whisker said, “is that future generations will look at his gravesite and say, ‘There was once greatness in this man.’”

Funeral arrangements have not yet been announced.

By TINA ALVEY The Register-Herald RENICK, W.Va. — As the world’s attention turns toward the Winter Olympic Games that…
byDon Smith 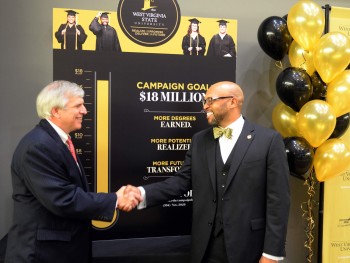 CHARLESTON, W.Va. — The WVPA will share photos from the WVSSAC Girls State Basketball tournament with its member…
byDon Smith