Thomas Cooper, a Republican, is accused of altering eight absentee ballot requests by changing the party affiliation on five from Democrat to Republican. The Pendleton County Clerk recognized that the voters were not Republicans and contacted them.

“This shows the process of absentee voting by mail works and its layers of security kept the integrity of the election intact,” Tennant said.

The multiple security layers associated with absentee mail ballots provide both the voter and election official the ability to check and double check that the ballot is the correct ballot and cast by the proper voter.

A tracking system allows the voter to track their ballot along the entire process. County Clerks can use best practices of checking addresses and matching signatures to verify the voter.

In this particular incident, because so many voters were already concerned with the privacy of their information, the county clerks and secretary of state should consider changing the absentee ballot request application and provide secrecy for its return. The counties can also offer secure drop boxes for applications and ballots if voters don’t want to mail them.

“No one understands the importance of election security and integrity more than I do,” Tennant said. “As Secretary of State, I still have more investigations and convictions for election law violations than any other secretary.”

More than 33 million people voted by mail in the 2016 General Election. According to the Vote At Home Institute absentee voting and vote by mail, allows for extra layers of checks and balances to ensure the integrity of elections, including centralized risk-limiting audits and ballot tracking.

A USA Today/Suffolk University poll shows two-thirds of Americans support voting by mail as an alternative to voting in person on Election Day during the coronavirus pandemic. 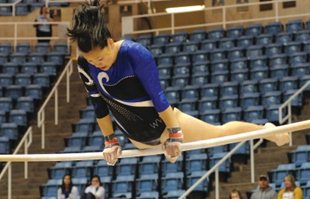 MORGANTOWN, W.Va. — One of the bright lights in the storied history of the WVU gymnastics program has…
byBrian Canterbury