CHARLESTON, W.Va. — Under the backdrop of diversifying West Virginia’s economy beyond energy, Walt Helmick and Kent Leonhardt agree on the role agriculture could play in creating new markets, careers and revenue for the state.

Aside from the potential of agriculture, Helmick, the Democratic incumbent Commissioner of Agriculture from Marlinton, and Leonhardt, a Republican state senator representing Monongalia County and Helmick’s now two-time challenger in the commissioner’s race, agree on little else.

Chief among contention between the two candidates: the Potato Demonstration Project, an initiative in place by Helmick’s administration aimed at developing the potato into one of the state’s major cash crops.

Helmick, a former state senator, noted the potato was once West Virginia’s top producing crop, citing USDA figures that showed 53,000 acres dedicated to potatoes statewide in 1927, the crop’s best year. The Department of Agriculture has taken the plan’s next step, processing the potatoes for sale, when it opened its first crop “aggregation point” at the former National Guard armory in Huntington’s West End.

The first of a planned seven or eight processing facilities scattered across the state, the Huntington plant serves between 35 to 40 potato growers in Cabell, Wayne, Lincoln, Mason, Putnam and Jackson counties.

“With those aggregation points in place, we’ll be able to entice and encourage many different growers throughout the western side of the state,” Helmick said. “Then we’ll move on up into the Kanawha Valley next year with a packaging/processing facility as well.”

Leonhardt, who says he has 20 years of farming and business experience, was openly critical of the project, calling it impractical, outside the Department of Agriculture’s chartered role and “gambling with taxpayer money.”

“You can make more money on an acre of basil than you can on 50 acres of potatoes,” Leonhardt said.

Leonhardt stated that West Virginia, being within one day’s drive from most of the major potato growing states, cannot compete with the onslaught of more technologically advanced out-of-state producers. Instead, he proposed West Virginia explore the production of niche crops rather than go toe-to-toe with the likes of Idaho, Wisconsin and Maine.

“Back in the days when (Helmick) talks about there were so many potatoes grown, we didn’t have the transportation system or the technology that are being used in those states, which are big potato producers,” Leonhardt said. “We can’t compete. We’re lucky if we get half to two-thirds the production per acre in a good year of what they can produce. We have to seek out new markets and new specialty crops.”

Helmick stated that, with technology already available, just 30 acres of farmland can produce approximately 400,000 pounds of potatoes annually. Though nearly all of West Virginia’s farms are considered “small farms,” Helmick said West Virginia has “a significant amount of tillable land,” pointing to about 39,000 acres in Mason County alone.

In chasing what he called a “$6 billion opportunity,” Helmick said progress is being made in keeping local the nearly $7 billion West Virginians spend annually on food.

“We’ll look inside (West Virginia) before we go outside. We have so much potential here inside to develop agriculture from within,” Helmick said. “We’ve moved forward. We have a plan in place, and the first step of it was here in Huntington with our aggregation point. We think we’re going to have to have seven or eight of those around the state from Martinsburg to Wheeling, Charleston, Huntington and Parkersburg, and then we’ll look down south with diversification.”

Leonhardt asserted that it isn’t in the Department of Agriculture’s charter to spend money on actual production of crops, but rather to promote and market the state’s goods instead. In addition to “niche crops,” Leonhardt said, if elected, he would ask farmers to “concentrate of what they can do best”: grass for farmers in the form of both direct pastoral feeding for livestock and hay, which he said would promote an increase in livestock with fewer farms.

Helmick also stated the hog and beef industries thrive in West Virginia, particularly in the state’s coalfields. Helmick said former mountaintop removal sites would be ideal for grazing, along with access to water, the extension of coal-driven railway system and its overall remoteness.

Helmick added that diversifying crops beyond the flagship potato project would not be a problem, listing maple syrup, honey and mushrooms as potential candidates.

Helmick defeated Leonhardt in the 2012 election after longtime Commissioner of Agriculture Gus Douglass did not seek re-election. Douglass died in 2015.

Libertarian candidate Buddy Guthrie did not respond to requests for an interview.

See more from The Herald-Dispatch.

Number of W.Va. drilling rigs down by nearly half 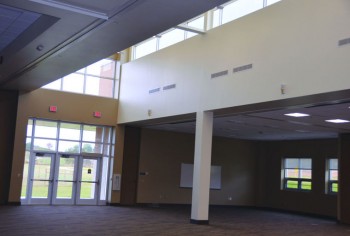 BUCKHANNON, W.Va. — Although a little behind schedule, the Army National Guard Readiness Center and the Event Center…
byBrian Canterbury