ELKINS, W.Va. — Davis & Elkins students and faculty congregated on the wrap-around porch at Halliehurst Wednesday to welcome back an old face.

Interim President G.T. “Buck” Smith mingled with those in attendance during an ice cream social hour in honor of his reappointment, which went into effect Wednesday.

Smith served as D&E’s president between 2008 and 2013 before retiring and serving as a consultant, when needed, for his successor Michael Mihalyo, who resigned earlier this summer to become president of the Appalachian College Association.

“It’s like we never left,” Smith said. “One can’t help but think back to seven years ago today when things were a little more uncertain and to come back to a place that’s strong, doing well and getting better is an affirmation of (accomplishment).”

Dr. Joseph Roidt, vice president of academic affairs at D&E, was appointed to his current position by Smith in June 2012.

Roidt said Smith brings extraordinary leadership skills and abilities to the position along with a deep knowledge of the institution and its people.

“The future is bright. I think during President Mihalyo’s tenure we accomplished a lot on the curricular front, on the policy front and strengthened the institution in very critical ways,” Roidt said. “I think we do have a strong foundation to build on in the years to come.”

Smith said he will incorporate his “six R’s” into the curriculum. When first becoming president at D&E he announced a six-step policy he and the board of trustees used throughout his tenure as a set of guidelines. The “six Rs” are: to reduce expenses, recruit students, retain students, raise funds, renew programs and reach for new opportunities.

“That will be the easiest thing to do,” Smith said. “Everyone’s familiar with that and we’re going to probably emphasize the same things again.”

Having taken back the reigns as president of the college, Smith said he’s looking forward to the interaction with members of the community and staff, and with the students who will return to school in six weeks.

“We feed off the students – that’s why we’re here,” he said. “When they come back it’ll all come to life again.”

D&E became debt-free during Smith’s first tenure. After owing more than $10 million to the bank in 2008, those debts were paid off in 2012.

“We’ve been able to sustain the finances and the enrollment so the numbers are positive,” Smith said. “(Mihalyo) tried to build on the previous five years and we’re just going to build on the last seven.”

“Among the key things he did was to firm up the internal operations,” Smith said. “One of the things that happened when resources were more limited was that people didn’t have the opportunity for professional development. There was a time when we couldn’t afford to send faculty or staff for professional development training and interacting and relating to other institutions because other funds were not available.”

He noted Mihalyo was instrumental in ensuring everyone on campus was capable of doing their jobs better.

“The encouragement I’m getting from a lot of corners is that the college and the community are going to feel a great era coming and we’re going to be one of the most attractive places in the country (for my successor),” Smith said.

He added he intends to serve in the interim capacity “whatever length of time it takes to get the right person.”

“If that’s six weeks that’s fine – if it’s six months that’s fine,” he said. “If it’s longer or shorter – whatever. We’re here to make the difference that needs to be made.”

Smith said he’d like to extend his appreciation to all those who have been integral in welcoming him and his wife, Joni, back to campus.

“We feel like we’ve come home again,” he said. 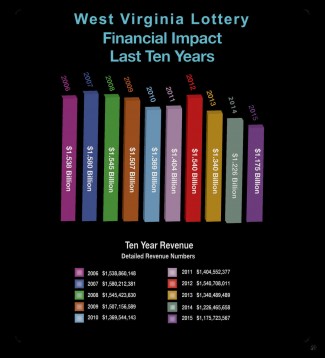 CLARKSBURG, W.Va. — State lottery revenues have been decreasing steadily over the last five years, with an annual…
byBrian Canterbury 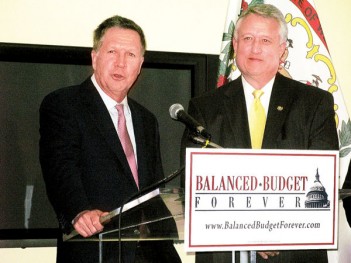