Republican Reps. Alex Mooney and David McKinley signed a letter to FCC Chairman Ajit Pai on Wednesday with 105 other members supporting the decision to roll back regulations established under President Barack Obama. Those rules prohibit internet service providers from favoring or blocking certain online content or from charging for higher-quality service.

Sen. Shelley Moore Capito, R-W.Va., who has sponsored several bills in Congress aimed at expanding rural internet access, said Friday she supported the decision. She said the internet is a product, not a utility, as proponents of the regulation would posit.
“That’s the crux of the question,” she said. “I think the internet developed, and innovated and became what it is not classified as a utility. So I don’t think we should classify it as a utility like net neutrality did. I think we ought to put it into a regulatory environment where investment and innovation can continue to occur at the rapid place that it has over the last 20 years.”

However, she sided with critics of the repeal in that the deregulated sector gives elbow room to internet service providers to throttle certain content — slow it down or speed it up — or block it outright. She said she would like to see Congress pass legislation to curb these threats.

“That, I hope, is what our next step will be as soon as we turn a corner into this next year,” she said. “We do need the certainty of legislation to make sure we do have the right rules of the road here.”

Sen. Joe Manchin, D-W.Va., did not outright condemn the FCC’s rollback of net neutrality. In a statement, he said he is concerned about the new FCC order, and he believes the internet should remain “open and free of any content discrimination.”

“I hope that this controversial decision will bring my colleagues to the negotiating table so that Congress — not unelected bureaucrats — can resolve this issue once and for all with a responsible, balanced, bipartisan solution,” Manchin said.

U.S. Rep. Evan Jenkins, R-W.Va., did not sign the letter, though his spokeswoman said that should not be interpreted as a position on the issue.

She offered a written statement from Jenkins that does not lay out a specific stance.

“A free and open internet is critical for economic development, free speech and innovation,” Jenkins said. “Should any legislation be brought before Congress to address net neutrality and the FCC’s actions, I will study it carefully to determine the impact it would have on West Virginians and our nation.”

Capito and Manchin voted in October to confirm Pai, who shepherded in the rollbacks. The vote passed 52-41.

The American Civil Liberties Union has advocated for net neutrality as the debate has mushroomed in recent weeks. According to its issue page on net neutrality, in a perfectly competitive market, competition would prevent providers from altering content in undesirable ways.

However, internet service providers don’t fit the theory for two reasons, the ACLU says. For one, the data manipulations are often subtle, hard to detect and can be attributed to outside factors, such as a slow connection. Secondly, the broadband market has such high barriers to entry that it’s an expensive market to get into, driving down competition, leaving consumers with fewer options if they catch on to any throttling or censorship.

The ACLU also lists several instances of ISPs censoring political content before the FCC imposed the regulations in 2015.

However, the FCC argues the rollback will spur innovation, investment and competition and shirk “heavy-handed utility-style” regulations that “imposes substantial costs on the entire internet ecosystem,” according to a Thursday news release. 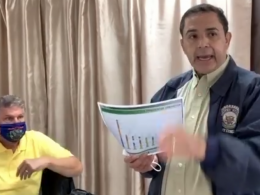 West Virginia U.S. Senators weigh in on increase of migrants at U.S.-Mexico border

MARTINSBURG, W.Va. — Though lottery fever swept the state as the Powerball jackpot climbed to more than $1…
byBrian Canterbury