Nick Casey explained at a press conference state ended fiscal 2017 creating a surplus because of money taken out of the Rainy Day Fund and “sweeps.”

“It appears at the end of the year as a surplus based on the sweeps of about $63 million,” Casey explained.

“Kind of the bad news is when you do the math, the Legislature predicted in their budget there would be about $82 million flowing into surplus. You cut that in half because half would go to the Rainy Day Fund. They rolled into the next year’s budget with about $41 million of expected surplus that can be spent next year.

“The negative is that number is only going to be about $31 million leaving about an $11 million gap,” Casey explained.

He said the gap at the start of the fiscal year is concerning.

“It is of concern to us because when you start the year $11 million in the hole, it means that we’re going to have to start looking at some issues,” he said.

Some of the surplus, he said was intended to go to the Department of Health and Human Resources, which will have a shortfall. He said he doesn’t anticipate the DHHR shortfall to be Medicaid.

“The DHHR shortfall, we don’t intend to put into Medicaid because if it did, it’s matched and we would suffer more.”

For the 2017 fiscal year, the governor’s office reported that General Revenue Fund collection numbers were $120.7 million below original estimates.

The original anticipated revenue gap for the 2017 fiscal year was projected to be as high as $192.2 million. However, a combination of one-time special revenues along with mid-year budget reductions of about $60 million, Rainy Day Fund monies and increases in the severance tax closed the gap.

“Positives are that the governor appears to be correct that severance tax continues to be a bright spot,” Casey said.

That is because the state can spend only what the Legislature has appropriated.

Personal income tax collections for June were $31.9 million below estimates. Consumer sales and use tax increased 5.7 percent above last year and exceeded monthly estimates by $3.7 million.

Tobacco excise tax collections were $194.6 million for the year, $1.6 million below estimate and 94 percent above last year. A gain in revenue is attributed to an increase in tobacco tax rates including an increase in the cigarette excise tax rate from 55 cents per pack to $1.20 per pack, an increase in other tobacco products tax rate from 7 percent of wholesale price to 12 percent of wholesale price and imposing a tax on e-cigarettes. June collections were about $900,000 above estimates. 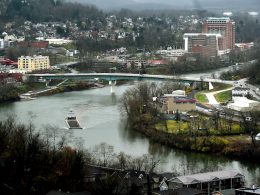 By Suzanne Elliott, The Dominion Post Morgantown should see the typical 25-30 inches this year  MORGANTOWN, W.Va. — It…
byErika Diehl