Release from W.Va. House of Delegates:

CHARLESTON, W.Va. – House of Delegates Committee on Health and Human Resources Chairman Jordan Hill, R-Nicholas, Monday said he is pleased with the progress of foster care reform legislation this session and anticipates a full package of reforms to become law by the time the Legislature adjourns in March.

“The House of Delegates has already passed two of the three bills aimed at reforming this system, and I expect the third to come out of committee in the near future,” Chairman Hill said. “These bills are the product of nearly a year of review, collaboration and investigation into various aspects of the system, and we have worked intensely with all affected parties to ensure they deliver on our promise to better serve our most vulnerable children and families.”

Delegates passed that bill by a 93-0 vote last Monday.

House Bill 4094 strengthens the office of the Foster Care Ombudsman, which oversees the foster care system within the state Department of Health and Human Resources.

That bill passed on a 97-0 vote last Wednesday.

A third bill, House Bill 4092, is pending before the House Finance Committee, which completed its final budget hearing with the state Department of Health and Human Resources – the agency that oversees the state’s foster care system – Monday morning.

“Now that the House Finance Committee has completed its budget hearing process, I expect consideration of this final foster care bill to happen soon,” said Chairman Hill, who is also a member of the Finance Committee.

“The budget hearing process is a critical first step for lawmakers as we begin to consider bills that trigger additional spending, like the foster care measure,” Chairman Hill said. “It’s important that we do our due diligence to thoroughly vet agencies’ spending plans before we start running bills that spend significant new amounts of money.”

Chairman Hill said he was disappointed some Democrat lawmakers called a press conference Monday morning to complain about the pace of progress on foster care legislation this year. He said the implication that House leadership wasn’t taking this situation seriously could not be further from the truth. Additionally, the state Senate in January created a new Select Committee on Children and Families to work on this very issue.

“Ironically, while these lawmakers were complaining to the press about the lack of action on these bills, we were in the Finance Committee questioning the very agency representatives who oversee this matter,” Chairman Hill said. “Instead of making a show for the TV cameras, we were in a committee room doing exactly what our constituents expect of us when we come to Charleston – that is: to actually work.

“From the moment we passed our first foster care reform bill last session, House leadership started working with all affected parties to begin investigating what more could be done,” Chairman Hill said. “We worked on this issue – on a bipartisan basis – throughout the entire interim committee process and produced a series of bills I was proud to sponsor. For some members of the Democrat caucus to now imply we’re not taking this issue seriously, or not moving fast enough, is not only disappointing, but simply does not comport with reality.” 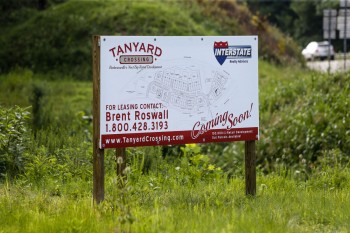 HUNTINGTON, W.Va. — Plans for the development of Tanyard Station in Barboursville have doubled in size. A proposal…
byBrian Canterbury