The Associated Press and other groups called the West Virginia race for Trump as soon as the state’s voting ended at 7:30 p.m.

Throughout the campaign, polls had shown West Virginia to be one of Trump’s strongest states, fitting well with Trump’s support among rural, white, blue-collar populations that have seen jobs disappear in recent decades.

The former reality-television star campaigned in West Virginia largely on his promise to revive the state’s faltering coal industry.

When the real estate mogul visited the state a few days before the May primary, he told a large crowd at the Charleston Civic Center that he would put miners back to work, the same way he told people in Ohio and Pennsylvania that he would bring back steel production that has been non-existent for decades.

After donning a hardhat from the West Virginia Coal Association while on stage at the Civic Center, the self-proclaimed billionaire feigned shoveling coal to show his devotion to the cheering crowd.

The state overwhelmingly supported Clinton’s Democratic primary opponent, independent Vermont Sen. Bernie Sanders. When the former secretary of state came to Mingo County in May to meet with miners, she was met with protests.

Neither Trump nor Clinton — or their running mates, Indiana Gov. Mike Pence and Virginia Sen. Tim Kaine — returned to the state during the run-up to the general election.

The Clinton campaign, while calling for a federal reinvestment effort for coalfield communities throughout Appalachia, was heavily criticized throughout the primary and general elections for supporting air-pollution regulations, like the Clean Power Plan, which seeks to reduce greenhouse gas emissions from power plants. Several other factors have contributed to the downturn in coal-mining jobs, including competition from lower-priced natural gas and the depletion of easy-to-reach coal seams.

State Republican candidates throughout West Virginia used a highly publicized clip, which featured Clinton saying that miners and coal mining companies would be put out of business, to attack her and fellow Democrats during the election. That snippet did not include her follow-up statements about how she would push for more federal investment in coal-dominated economies.

In many ways, West Virginia ran counter to much of the country in the lead-up to the election.

While Republicans in more populous swing states were distancing themselves from Trump due to his controversial comments about immigrants, Muslims, women and people with physical disabilities, Democratic politicians in West Virginia were fleeing from Clinton, who was plagued throughout her campaign by questions about her use of a private email server and her family’s charity, the Clinton Foundation.

During West Virginia’s second gubernatorial debate, Republican Bill Cole and Democrat Jim Justice, a billionaire coal mine operator, bickered over which one of them was better friends with Trump, who was then dealing with the release of a 2005 video that caught him bragging about how his celebrity status allowed him to grope women.

See more from the Charleston Gazette-Mail. 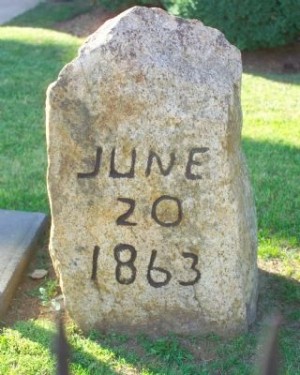 CHARLES TOWN, W.Va. — A rock that once sat in front of the Jefferson County Courthouse is set…
byBrian Canterbury