CHARLESTON, W.Va. — With an apparent consensus growing for the framework of a state revenue plan — now including an increase in the sales tax to 6.5 percent and an initial three-step reduction in income tax rates — a West Virginia House-Senate conference committee focused Thursday on what House Finance Chairman Eric Nelson, R-Kanawha, called the detail work of “brackets, rates and triggers.”

The second day of conference on House Bill 107 was highlighted by a perhaps unprecedented appearance before the committee by Gov. Jim Justice, who called on the Legislature to quickly move forward with the plan, saying, “Don’t be afraid, because it’s going to work.”

As currently designed, the plan would raise about $89 million in new tax revenue to help close the state budget deficit for the 2017-18 fiscal year. However, that drops to about $12 million in 2018-19, as a 7 percent income tax reduction starts to kick in, and just $1 million in 2019-20, in the first full year of lower income taxes.

In a floor speech Thursday, Sen. Mike Romano, D-Harrison, warned that the proposal could leave the state in worse financial shape than the current $290 million budget shortfall.

“If we do this, and there’s no growth, you’re going to put us on the brink of disaster,” Romano warned.

However, in conference committee, Justice assured legislators that passage of companion legislation to raise $130 million a year for road construction bonds will provide more than enough economic stimulus to offset the loss of $130 million a year in income tax collection with the first 7 percent rate reduction.

“Everybody’s going to be dancing in the streets, because we’re going to have nothing but good stuff to talk about,” Justice said, employing his usual down-home rhetoric.

Justice said studies show that each $1 billion in funding for highways construction creates 20,000 jobs, and said the state has $1.4 billion in roads projects “ready to go,” once the initial sale of road bonds goes through.

He said Budget Office projections estimate that 28,000 new workers would provide $90 million in new tax revenue, a figure he said is actually closer to $250 million.

Justice has said his roads plan will total $2.4 billion and provide 48,000 jobs.

On Thursday, Justice said his overwhelming concern is to get a budget passed that “doesn’t hurt the common, everyday family,” saying he vetoed the budget bill passed by the Legislature in the waning moments of the regular session because of its severe cuts to public education, higher education, health care and other services.

The governor again called on legislators to “lay aside some of your partisan stuff and work together” to quickly resolve the budget impasse, saying they will be held accountable if the 2017-18 budget is not enacted by the start of the new budget year on July 1.

Justice said state employees are “stressed and worried” about the potential of furloughs and layoffs in the event of a state government shutdown at the end of the month.

Thursday marked the 14th day of the special session on the state budget, a session that has met, on and off, since May 4.

Senate Majority Leader Ryan Ferns, R-Ohio, serving as conference committee co-chairman, said there is general consensus for the framework of the revenue plan:

Increasing the sales tax from 6 percent to 6.5 percent, while eliminating current exemptions for telecommunication services and digital downloads, to raise about $190 million a year. However, a controversial measure to also eliminate an exemption for building-contracting services, which would have raised as much as $92 million a year, is out of the current plan.

A 7-percent to 7-percent to 6-percent phase-down of income tax rates, with yet-to-be determined economic thresholds, or “triggers” to determine when the second and third phase of the reductions will occur. The three phases would cut tax collection by $360 million a year.

Setting the triggers is one of the primary issues facing the committee. Panel members don’t want to set the triggers so high as to be unattainable, but also not so low that a one-time spike in the economy could result in potentially devastating revenue losses.

Justice said he wants to see the triggers incorporate new job creation as a threshold.

“I would say to you, just be cautious, don’t be reckless, because it’s going to work,” he told the conferees. “If you have the proper triggers, the idea [that] the sky is falling in the out years is bogeyman stuff.”

Critics have argued that the income tax cuts shift tax burden from upper-income to middle- and lower-income West Virginians, and could blow a hole in the largest and one of the most stable sources of state revenue.

Beyond the first 20 percent in cuts, each $110 million in sales tax increases would trigger future cuts under that plan.

Muchow said each phase of the cuts reduces overall state general revenue collection by about 3½ percent. Relying strictly on growth in the economy, and no additional tax increases, “We’re looking at CPI plus 7,” Muchow said, referring to the consumer price index — currently about 2 percent — and 7 percent, equaling 9 percent growth in sales tax collection.

Also to be determined are income tax brackets and rates. Currently, there are five brackets, with the highest being 6.5 percent for incomes of $60,000 or more.

Senate Republicans toyed with multiple variations from the regular session on, including proposals to eliminate income taxes entirely, as well as to set a single 2 percent rate.

The current draft of the revenue proposal also completely exempts military pensions, and exempts the first $50,000 in Social Security retirement payments from income taxes, and expands the historic-building rehabilitation tax credit. Combined, those benefits would reduce state revenue by about $26.6 million a year.

The proposed legislation also restores a proposal for tiered rates for severance taxes on coal, replacing the 5 percent tax with a sliding scale from 2.5 percent to 8 percent, tied to price per ton.

Justice told the committee the proposal could help mines producing low-priced steam coal, of which he said his former coal companies “don’t mine one pound.”

“If things are really bad, we’re going to throw these companies a bone of 50 cents a ton,” he said.

Justice said that could cost the state about $32 million in lost tax revenue, but he suggested that it is better than getting no severance taxes from closed mines.

“We’ve got to help our miners,” he said.

By Steven Allan Adams, For The Intelligencer CHARLESTON, W.Va. – A Boone County doctor and state senator has…
byDon Smith 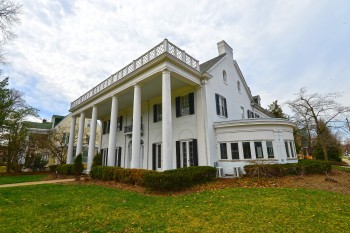 CHARLESTON, W.Va. — Marshall University expects to spend about $500,000 in ongoing renovations of its president’s house, a…
byBrian Canterbury