Tanks for C8 filtration placed by crane in Vienna

3 minute read
Parkersburg News and Sentinel photo by Jess Mancini A tank in the carbon filter system to remove C8 from the water in Vienna is lowered onto a concrete pad Thursday morning at Ninth Street by workers from 3D Construction of Parkersburg and Carver Plumbing of Marietta.
Total
0
Shares
0
0
0

VIENNA — The large tanks in the carbon filtration system at the Ninth Street site to remove C8 from water in Vienna were lifted into place by cranes Thursday morning.

The system expected to reduce C8 concentration to non-detectable levels could be in operation in about a month, Mayor Randy Rapp said.

“Once they are installed by mid-October, we’ll be back on our own water system,” Rapp said. “We’ll disconnect our system from Parkersburg at that time.”

Two filtration systems are being installed and financed through Chemours, the spinoff company from DuPont, which once used C8 to make Teflon at the Washington Works Plant. C8, also called PFOA, has been linked to six diseases in humans.

The first system on 58th Street for wells No. 11-14 has been in operation for about a month. Ninth Street will filter water from wells No. 9 and 10.

Installation of the carbon filters started this spring after the U.S. Environmental Protection Agency set the lifetime C8 exposure at 0.07 parts per billion, a reduction from the previous short-term standard of 0.4 ppb. The water in Vienna had tested around 0.1 ppb or above.

After the EPA issued the new level, the Mid-Ohio Valley Health Department issued a do-not-drink the water advisory in Vienna.

Vienna and Parkersburg connected water systems at a point near Home Depot, enabling Vienna to supply tap water from Parkersburg to a third of its customers from 23rd Street south toward the mall.

The Vienna filtration system is identical to the system installed in Belpre, which was among the six water providers where carbon filters were to be installed according to the settlements of the C8 lawsuits.

Workers from 3D Construction of Parkersburg and Carver Plumbing from Marietta installed the tanks Thursday morning using cranes to lift them into place at the Ninth Street filtration system site adjacent to Sam’s Club.

The plan is to install the system and get it running as soon as possible, then construct the building around it. The summer-like weather has been a benefit, Rapp said.,

“That’s the plan, get the system up and running, then build the buildings,” he said.

The project will result in a major upgrading of the entire water distribution system in Vienna in terms of facilities and water quality, Rapp said. The system while reducing C8 contamination to non-detectable levels also filters all the water.

“In the long run, this is going to be a real plus for our water system,” he said.

A science panel created under the 2009 settlement with DuPont studied the health data of nearly 70,000 residents in the Mid-Ohio Valley and found C8, also called PFOA, was linked to kidney cancer, testicular cancer, ulcerative colitis, thyroid disease, pregnancy induced hypertension including preeclampsia and hypercholesterolemia. Several bellwether cases tried in a federal court in Ohio resulted in DuPont being liable for damages.

High levels of the once-used compound have been found in other communities in the United States and around the world.

After treatment, the aggregate C8 concentration in the water in Parkersburg was 0.029 ppb, according to the latest tests. Untreated water from one well tested at 0.076 ppb.

See more from the Parkersburg News and Sentinel. 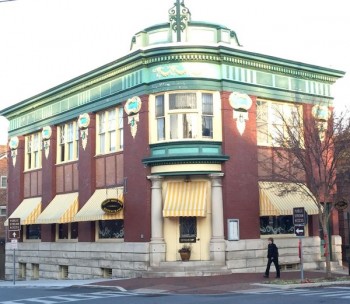 SHEPHERDSTOWN, W.Va. – After being known in the Shepherdstown community for 38 years, the Yellow Brick Bank restaurant…
byBrian Canterbury

From The Intelligencer of Wheeling:  Most public school officials and administrators probably support demands from many teachers for…
byDon Smith

WVU Today MORGANTOWN, W.Va. — Students at West Virginia University will have the opportunity to experience a full…
byDon Smith