Effort underway to bring candidates to the voters

CHARLESTON, W.Va. — Three statewide non-partisan organizations hope to provide voters across the Mountain State an opportunity to learn where the state’s major gubernatorial candidates stand – in their own words – on the issues prior to the November 2016 general election.

By announcing the proposed date for an event with broad media access and voter interest, the three organizations hope to bring the candidates to the stage in October.

“West Virginians deserve the opportunity to compare and contrast the positions of the Democratic candidate Jim Justice and the Republican candidate Bill Cole,” said Don Smith, executive director of the West Virginia Press Association. “Election of West Virginia’s next Governor is vitally important for the future of the state. In organizing this event, we wanted to ensure that all residents – from Cabell County to Jefferson County, Hancock County to Mercer County and all points in between – would have live access and thorough coverage in their local newspaper.”

The three partnering organizations also hosted a U.S. Senate debate in 2014 that was broadcast and covered by media across West Virginia, as well as televised nationally on C-SPAN. “There’s a lot of interest around this state in hosting a gubernatorial debate; however, there are also a lot of challenges in finalizing and organizing such an event. Our organizations have had success partnering to offer broad public access and provide the candidates with a statewide stage to explain their campaign and debate the issues,” Smith said.

“As the state’s public broadcaster, we’re interested in providing a gubernatorial debate to all other T.V. and radio stations, as well as a live stream for newspaper websites across the state,” said Scott Finn, executive director and CEO of West Virginia Public Broadcasting. “We hope to give the people of West Virginia an opportunity to learn more about the candidates views on the important issues impacting our state and its future.

“On behalf of nearly 300,000 members across West Virginia, AARP is pleased to be a partner in this important event,” said Gaylene Miller, AARP West Virginia State Director. “We look forward to presenting a fair and balanced debate that provides all voters with as much information as possible about the candidates’ positions on key issues affecting our state.”

Live coverage of the debate between the two gubernatorial candidates will be available in all 55 counties, as West Virginia Public Broadcasting and the newspapers of the West Virginia Press Association will join together to provide comprehensive television, radio, internet and print coverage.

“As we work to finalize details of the event, we certainly hope to include additional media and partners to increase the public’s access,” Smith said, explaining that the evening will conclude with a broadcast featuring post-debate analysis from a panel of West Virginia media members that will be live streamed by the event’s media partners.

“All of that information will be gathered and used to formulate the actual debate questions,” Smith said. 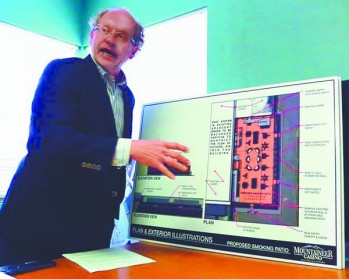 By RUSTY MARKS The State Journal CHARLESTON, W.Va. — Members of the West Virginia House of Delegates and…
byDon Smith