Trump’s budget calls for a $191 billion reduction nationally to Supplemental Nutrition Assistance Program (SNAP), commonly known as “food stamps.” Over a 10-year period, West Virginia Center for Budget and Policy Campaign Coordinator Seth DiStefano reported Thursday, $125 million in federal funding will be cut from state coffers to feed the poor, once the budget is fully implemented, and that’s money the state can’t provide, he added.

“If you see our budget situation right now, we are not going to be able to find $125 million,” he said. “Simply put, that is 25 percent of food that is not there.”

West Virginia is in the midst of a $500 million budget deficit, following $600 million in cuts to the state budget in recent years.

SNAP provides modest food assistance to one in five West Virginians, granting $1.29 per person per meal to low-income families who qualify for assistance.

“Any change of funding at the federal level will affect West Virginia’s ability to provide these services to vulnerable citizens,” Adler said.

Historically, SNAP benefits have been financed with federal funds to ensure that residents in low-income households have access to adequate food despite where they might live, according to the report from the non-partisan Center on Budget and Policy Priorities.

Trump’s budget would force states to cover 10 percent of SNAP costs beginning in 2020 and increases the share to 25 percent in 2033 and would also allow states to cut SNAP benefits, seriously threatening SNAP’s extraordinary long-term success in reducing severe hunger and malnutrition, according to the CBPP report.

“SNAP is a fundamental promise that we will look out for basic food assistance, as a society,” DiStefano said. “No one should have to go hungry.

“This is beyond the pale,” he added. “Our federal lawmakers should absolutely, categorically reject any budget that cuts SNAP or tries to alter it as a fundamental government program.”

Manchin, who has supported Trump’s policies which promote coal mining sector growth in the state, said that he will be opposing the proposed cuts as a member of the Appropriations Committee.

“The President’s plan to cut SNAP by $193 billion over 10 years will not serve the 375,000 West Virginians who count on this program, the majority of whom are families with children,” Manchin said in an emailed statement. “As our state faces a budget crisis and as we work to grow our economy, we cannot rip critical assistance from our state’s most vulnerable children and families who struggle every day to get by.

“West Virginians don’t want handouts, but the federal government must be our partner as we work to make our state stronger,” Manchin added.

Adler said that WVDHHR agents “will be exploring the impact of any changes on federal funding of SNAP.”

Trump’s budget plan also calls for a $21 million slash to the Temporary Assistance for Needy Families (TANF) program and a $1.2 billion reduction for the Women, Infants and Children program (WIC).

DiStefano said that every $1 in SNAP generates $1.70 in economic growth, putting around $499 million into the state economy in 2016.

In southern West Virginia, major retailers, including Walmart in Beckley, Crab Orchard and Fayetteville and Kroger in Fayetteville, Beaver and at two Beckley locations, accept SNAP, along with smaller, locally-owned businesses.

“We’re moving beyond the human impact, but SNAP is also very important for West Virginia’s economy,” said DiStefano. “When times are tough and the economy’s down, SNAP is there for you.

“It’s there for your economy, to keep the bottom from falling out.”

Despite reports from West Virginia University that the state recession was ending in 2016, many West Virginians are still having trouble finding work. In January, the unemployment rate rose in all 55 counties, later taking a slight dip to 5.6 percent. In 2016, 100,000 West Virginia residents or .5 percent of the population, left the state, making West Virginia the state to lose the highest percentage of its population and workforce that year.

The ministry receives some aid from Mountaineer Food Bank but relies mainly on private donations from area organizations, including Panera, two local hospitals, and others.

“When we started, we only (served lunch) three days a week,” she said. “Now, we’re up to five and, some weeks, six.

“We have had to really step up the amount of food we’ve purchased,” she said. “We used to buy very little food because what we got as donations from the USDA would stretch us, but now, we purchase alot more of our food.”

Worley said some diners comment that they don’t eat a full meal between lunches at CC.

If food stamps are cut, Worley said CC is one of several local feeding kitchens that will continue to try to meet the local need for food.

“We might have to stretch our food a little thinner,” she said, adding that they already “stretch the food quite a bit.”

“I can’t tell you how much further we’ll be able to stretch it,” she added. “Our worst case scenario would be to cut back on days.”

Heart of God Ministries in Beckley also operates a feeding ministry, but data was not available Thursday.

The regional bureau of The Associated Press, shares 10 things you need to know Wednesday, May 8, 2019.…
byDon Smith 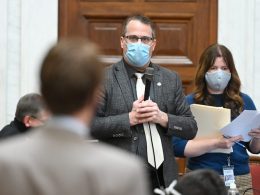 A sampling of bills introduced in West Virginia Wednesday, March 3

By David Beard, The Dominion Post MORGANTOWN, W.Va. – Here is a sampling of bills and resolutions introduced Wednesday,…
byErika Diehl