CHARLESTON, W.Va. — Members of the West Virginia Senate’s committee on finance passed an amended version of a House of Delegates tax and revenue bill on Tuesday, May 23 that would raise the state sales tax from 6 percent to 7.25 percent and would allow for the gradual phase-out of personal income taxes currently paid by state residents.

Meanwhile, the House of Delegates took up six bills requested by Gov. Jim Justice on Tuesday and sent them all to committee for further study. A budget bill, which legislators have been waiting for since Justice first called lawmakers back into special session May 5, was among the legislation introduced.

The new budget bill, House Bill 115, would come in at about $4.35 billion, down from the $4.5 billion budget Justice proposed at the start of the regular legislative session in February. The House took up House bills 111 through 116 on Tuesday.

Justice’s budget is based on the assumption that the Legislature will go along with raising new revenues and the state sales tax, an idea that has not agreed with some members of the House of Delegates. Delegate Michael Folk, R-Berkeley, said Tuesday he intended to introduce his own budget plan when the House reconvenes on Wednesday, May 24.

Justice’s proposed tax and road bills are currently working their way through the state Senate.

On Tuesday, May 16, the Senate passed a tax reform and revenue bill that would have raised the state sales tax from 6 percent to 6.85 percent, would have taxed telecommunications and digital services and removed sales tax exemptions from several goods and services currently not being taxed and would have created a tiered system for coal severance taxes to help the coal industry when production is low. The bill also would have created new income tax brackets and would have allowed for a gradual phase-out of the state’s personal income tax.

But when the bill was sent to the House, delegates chose to ignore the legislation and drafted their own tax and revenue bill. That legislation, House Bill 107, would have kept the sales tax at 6 percent but raised revenue by removing sales tax exemptions from several goods and services that are not currently taxed.

The House bill also would have eliminated personal income taxes for those who receive Social Security benefits, and would have eliminated paying income taxes on military retirement income. Proponents of the change said the exemptions would aid those on limited incomes who most needed the help as opposed to the Senate plan, which favors the wealthy.

The House approved the bill and sent it over to the Senate, where the Select Committee on Tax Reform restored most of the provisions of the original Senate bill. But the amended bill raised the sales tax hike to 7.25 percent while adding an income tax exemption for Social Security income.

The bill also restored a hike in the corporate income tax from 6.5 to 7 percent.

When the amended bill went to the finance committee on Tuesday, the committee kept most of the changes made by the tax reform committee. But the committee shortened a phase-out of paying income tax on Social Security income from three years to two, and added a fourth tax bracket for West Virginians who make more than $200,000 a year. The highest tax bracket under the previous version of the bill was $35,000 and up.

Both the finance committee and tax reform committee versions of the bill would cut personal income taxes by 15 percent next year and 20 percent the following year, with income taxes phased out completely over several years if certain revenue triggers are met.

The Senate also restored a tiered severance tax system that would allow those in the coal industry to pay less severance tax when production is low.

Mark Muchow, deputy state revenue secretary, said the net effect of raising the sales tax, phasing out income taxes, removing tax exemptions and the changes in coal severance tax rules could be expected to create an extra $147 million in revenue for the coming year. But as lower personal income tax collections kick in, the state can expect to see a net revenue loss of $56 million in 2019, $122 million in 2020, $137 million in 2021 and $178 million in 2022.

Democrats on the Senate Finance Committee were worried that doing away with income taxes will set the state up for massive deficits in the future. However, Senate President Mitch Carmichael, R-Jackson, and other leading Republicans in the Senate, are convinced that eliminating income taxes will attract people and businesses to the state and lead to economic growth that will offset the losses in tax revenue.

The Senate is expected to suspend its normal rules in order to pass the tax and revenue bill Wednesday, May 26. The Senate is also expected to vote on bills that would raise tolls on the West Virginia Turnpike and allow for tolls on other state roads, and raise fuel taxes and DMV fees to pay for a massive road construction project.

Senators say they are aware that the amended tax and revenue bill will likely not pass the House of Delegates. Senate Finance Chairman Sen. Mike Hall, R-Putnam, said Senate leaders hope to work out difference between the two chambers in conference committee, where only a handful of lawmakers have to come to an agreement instead of 134.

By ANDREA LANNOM The Register-Herald CHARLESTON, W.Va. — The director of West Virginia University’s Bureau of Business and…
byDon Smith

CHARLESTON, W.Va. — An Alum Creek man accused of shoving an elderly pastor to his death during a…
byBrian Canterbury

By BRETT DUNLAP The Parkersburg News and Sentinel CHARLESTON, W.Va.  — A resolution, passed in the state Senate,…
byDon Smith 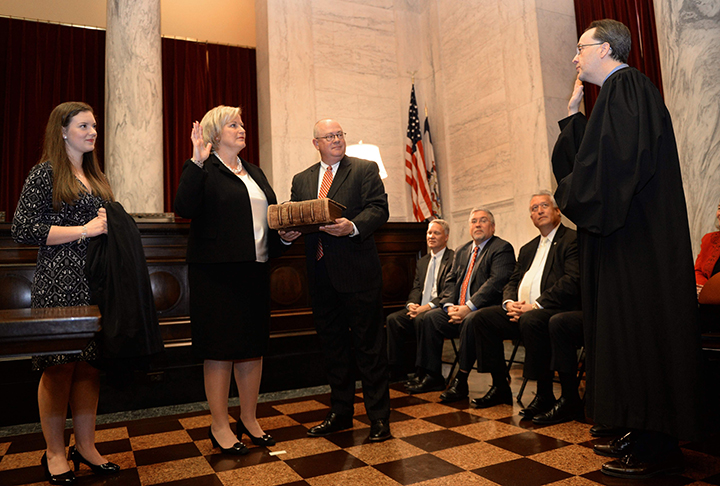 WV Supreme Court to have female majority for 1st time

By KATE WHITE Charleston Gazette-Mail CHARLESTON, W.Va. — The West Virginia Supreme Court will have a female majority for…
byDon Smith