CHARLESTON, W.Va. — Work done by a 10-person crew of volunteers from the Kansas state parks system helped make possible the reopening on Friday of a flood-damaged 3.5-mile section of the Greenbrier River Trail north of Caldwell.

The Kansas trail repair crew arrived with their own tools, equipment and vehicles, and spent a week clearing rocks, trees and other slide debris from the trail and its right-of-way, according to West Virginia State Parks Chief Sam England.

Linda Lanterman, director of the Kansas Department of Wildlife, Parks and Tourism, called England shortly after widespread flooding swept through the state in late June, offering to do anything she could to help with flood damage repair. The state parks chief said he initially thanked Lanterman for her concern and offer of assistance, but declined to take her up on her offer.

“Polite offers are sometimes made and often it’s difficult to know when to accept or to appreciate the concern,” England said. But shortly after her initial call, Lanterman called back…

By BETH HENRY-VANCE The Inter-Mountain FRENCH CREEK, W.Va.  — A young bald eagle and other birds attracted a…
byDon Smith 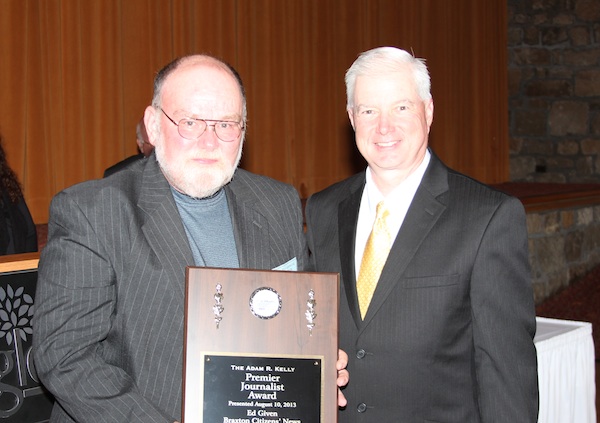 WHEELING, W.Va. – Ed Given, publisher of Braxton Citizens’ News in Sutton, was honored with the Adam R.…
byBrian Canterbury