CHARLES TOWN, W.Va. — Jefferson County Commissioner Eric Bell has announced his intention to step down from his position in the wake of charges of an inappropriate relationship with a teenage boy.

“After much consideration, I will be resigning from my position as Jefferson County Commissioner,” Bell said in a statement released Tuesday afternoon by attorney Matthew Harvey, whose office of Taylor & Harvey is representing him in the case. “Addressing these allegations in court will be my primary focus and any distractions to the Commission will frustrate their purpose to serve the citizens of Jefferson County. I will not be making any further comments at this time.”

Bell is scheduled to appear in Jefferson County Magistrate Court on Thursday, June 30, at 9:45 a.m. in front of Magistrate Mary Paul Rissler, according to the court.

Bell, a veteran of the U.S. Navy, was elected to represent the Harpers Ferry district on the Jefferson County Commission in November 2014.

Bell was charged last week with sexual abuse by a person in a position of trust, possession of child pornography, and distribution and display of obscene material to a minor. Sgt. W.R. Garrett of the West Virginia State Police’s Crimes Against Children Unit said the alleged victim in the case is a 16-year-old boy for whom his parents trusted Bell as a “mentor.”

Jefferson County Commission legal counsel Nathan Cochran did not return a message from The Journal seeking comment. The commission next meets Thursday, June 30. 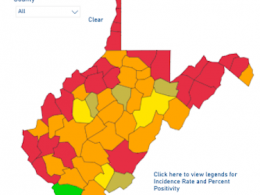 By COURTNEY HESSLER The Herald-Dispatch HUNTINGTON, W.Va. —  An Ohio drug dealer collapsed into his chair in tears…
byDon Smith