PARKERSBURG, W.Va.  — While local governments are adding up the expenses from the massive IEI Plastics warehouse fire, small businesses felt the heat from the beginning, too.

Business at the Broadway Sandwich Shop was good on Day 1, Oct. 21.

That surprised owner Sandy Caplinger, who thought her day was going to be spent making lunches for the numerous firefighters responding to the inferno at the old Ames shovel plant.

Despite the roads being cordoned off for blocks around the Camden Avenue facility, patrons found other parking accommodations, including the parking lot at the Fairplains School, from where they walked to the restaurant, said Caplinger, who once taught school there. 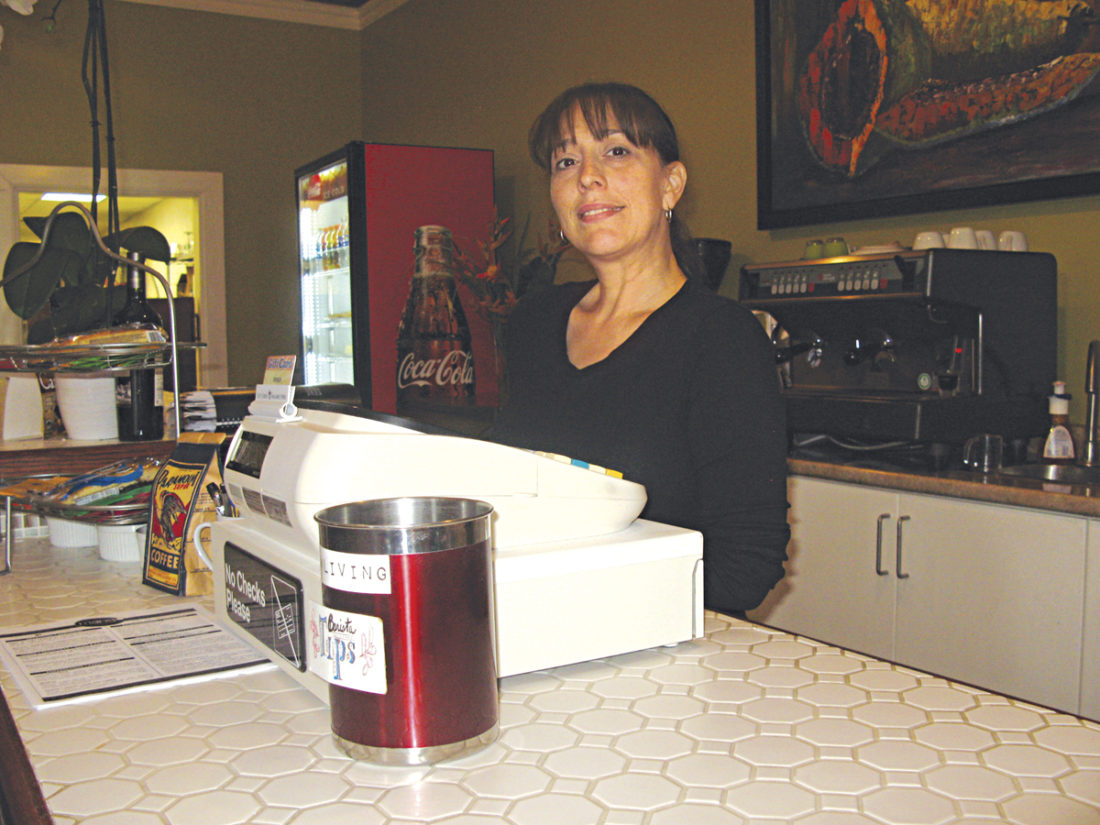 Photo by Jess Mancini Tere Clegg of Mango Latin Bistro on Market Street was closed Oct. 23-24 because of the IEI Plastics warehouse fire. Business was slow for the entire week, she said.

Fortunately for the restaurant, the air around the immediate area Saturday remained relatively free of smoke because of weather conditions. The thick black smoke rose hundreds of feet into the air where it was carried away by the winds.

“We did not get any smoke,” Caplinger said. “The wind was going in the opposite direction.”

However, things changed, she said. Business slacked off after commanders at the scene warned people to stay away and the weather changed, causing the smoke and odors from the predominantly plastics fire to remain closer to the ground.

A heavy fog later in the week exacerbated conditions, and the smell, she said. Business came to a near halt, Caplinger said.

“Oh my goodness, it was like a morgue,” Caplinger said. 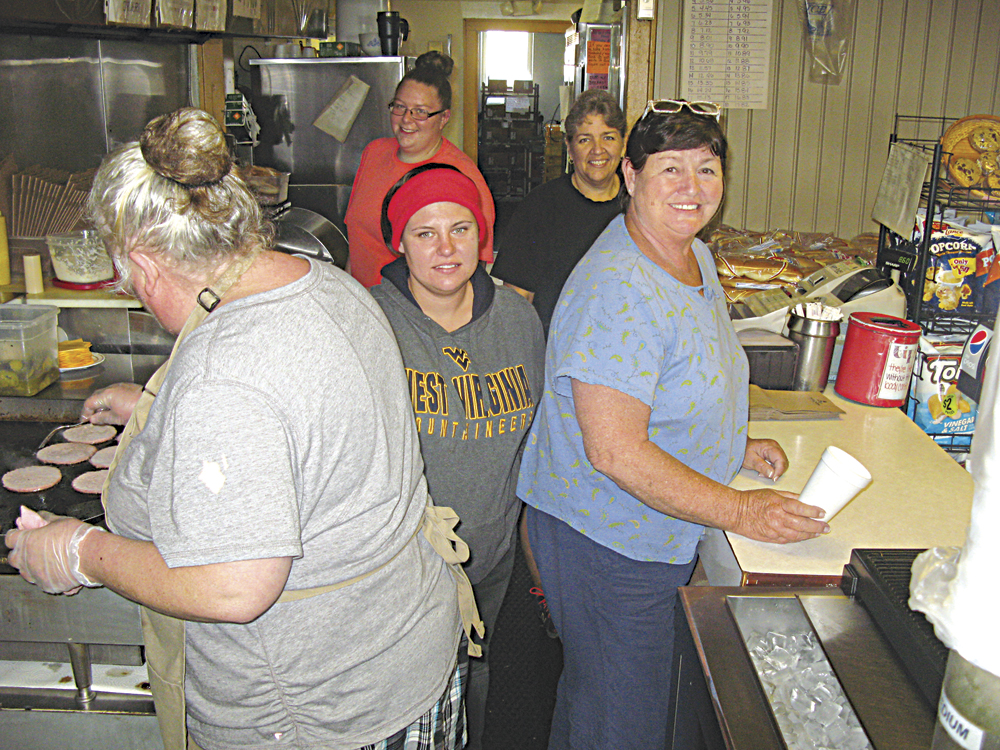 Photo by Jess Mancini Day 1 of the IEI Plastics fire on Oct. 21 was busy for the Broadway Sandwich Shop next to the former Ames shovel plant, but the weather changed and so did business for the rest of the week. From the left, Angie Lattea cooking hamburgers, Amber Gains in the Mountaineer hoodie, Katie Erb, Rita Erb and owner Sandy Caplinger behind the counter at the Broadway Sandwich Shop.

The IEI warehouse smoldered for about a week. Smoke from the facility was seen north of Cambridge.

Caplinger took advantage of the week of the fire to keep the employees working.

“We did a lot of cleaning,” she said.

Business has been slowly returning to the sandwich shop, she said.

“Things are getting back to normal,” Caplinger said.

Hundreds of government and downtown employees are customers of shops like Hot Dog Willy’s, an outdoor vendor of gourmet hot dogs at Bicentennial Park next to the courthouse in downtown Parkersburg. Hot Dog Willy’s closed for the week, owner Will Heflin said.

Heflin said he didn’t want to sell food in the open air with the chance of ash falling into it. Weather conditions changed the early part of the week and prevented the smoke, ash and odor from being blown away high in the atmosphere.

Besides the loss in sales, the week off also caused many of the homemade items to be thrown out, he said.

Aided by the new taco and reuben dogs, business started to return to normal on Thursday, Heflin said.

“They helped build the business back up to where it was before all this happened,” he said.

No time is a good time for a fire. This one, however, came at a bad time for Hot Dog Willy’s, he said. Heflin planned to open at the Grand Central Mall for the winter months at the first of November, but the week’s loss of sales prevented that, he said.

“It put us back two weeks in the schedule to open,” he said.

“There was nobody downtown,” Clegg said. “Downtown was completely dead.”

The restaurant reopened Wednesday, she said. Customers came, probably wanting to get out because of being cooped inside, but business was slow, Clegg said.

“The whole week was a bad week,” Clegg said.

Business this past week started returning to normal, Clegg said. Unfortunately, while the business losses were because of a fire, the restaurant’s insurance doesn’t cover it, she said.

If there was any impact across the river in Belpre, it was hard to see, according to Karen Waller, president of the Belpre Area Chamber of Commerce.

Her main concern was the impact on the chamber’s annual dinner that was held on Oct. 26, five days after the fire started when weather conditions changed causing smoke and fumes to stay closer to ground level.

“I expected it might impact the dinner, but it didn’t,” Waller said. “We had very few no shows.”

It may be difficult to measure the effect of the fire upon sales tax or Business and Occupation Tax revenues in Parkersburg for several reasons, Eric Jiles, finance director for the city of Parkersburg, said.

The last fiscal quarter of the year, October, November and December, would also include any revenue from the Christmas holidays, he said.

“We wouldn’t know what that would be until the end of January or February,” he said.

Wood County Commission President Blair Couch said officials are still requesting invoices and building a tally for the costs to the county. When it’s complete, they plan to turn the information over to the state, he said.

“It is no understatement when I say if we continued to fight this fire, we would have bankrupted the county,” Couch said.

On Oct. 25, Gov. Jim Justice said the state would assist Wood County with the costs of fighting the fire.

In the initial stages of fighting the fire, millions of gallons of water from the Parkersburg Utility Board were used. With the help of a pump, the Little Kanawha River later became the primary water source.

Utility board Manager Eric Bennett said 7.85 million gallons of the utility’s water was used, which would cost $42,704.

Had a monthly fee for sprinkler service been paid, there would have been no charge for the water used to extinguish the fire, Bennett said last week. But the fee had been discontinued for at least a year due to maintenance issues with the building’s sprinkler system.

Although the warehouse was located just outside city limits, Parkersburg firefighters were at the scene every day, Fire Chief Jason Matthews said. The department incurred 40.5 hours of overtime on the first day of the fire, with an additional 20 hours tallied the rest of the week as some firefighters assisted with Incident Command staff at the scene.

Other firefighters were at the scene from 8:30 a.m. to 7:30 p.m. Oct. 24-27, 8:30 a.m. to 5 p.m. Oct. 28 and 9 a.m. to noon Oct. 29, when the fire was declared out. Matthews said additional overtime was avoided by rotating firefighters from each of the city’s six stations to the scene for a couple of hours, leaving five stations ready to respond to calls within the city.

Wood County Schools closed due to air quality concerns. The district hired the Center for Toxicology and Environmental Health to do testing at all of the schools and facilities.

Those tests came back clean and crews worked to replace filters at all facilities prior to classes resuming Oct. 30.

Assistant Superintendent Mike Fling, who oversees facilities for Wood County Schools, said officials are still assessing the full cost of the fire for the school system. The district spent $30,000 on air testing and purchasing new filters, but those numbers do not include manpower, either overtime for maintenance workers and custodians, or additional installation help.

Fling said the system hopes the final cost will be below $100,000, but he anticipates the district will be requesting reimbursement for expenses from the state.

The incident also had a financial impact on the local volunteer fire departments, such as Vienna VFD which had two aerial trucks which were used on the scene. They were rotated and were not both on the scene at the same time.

“Incident command at this fire, in my opinion, did an excellent job,”said Steve Scholl, chief of the Vienna Volunteer Fire Department. “They tried to rotate crews and equipment out so no one department was beat up too bad.”

Scholl said the Vienna VFD members did not spend as much time on the scene as other departments.

“We rotated our aerial trucks in,” he said. “We lost no equipment, even though they fueled the trucks up while we were there, we still had some fuel expense.”

“There was a little wear and tear on the trucks, because they were running constantly for so long, but we had no real loss,” he said. “Everybody is trying to get recouped for fuel costs, but the amazing thing was the scene was run so well there were no injuries. Some departments had some mechanical problems, but we didn’t.”

Scholl said in a fire truck in the engine not only provides the power to move the truck but also runs the pumps to put water on the fire.

“One main concern was being able to have as many firefighters on the scene while having enough at the home station to cover their own area. You can’t strip your own area,” he said. “You have to keep some on the city and keep some there.”

Scholl said when they got to the point of covering the scene with water, they only had a few members there. During the time he said members of the Vienna VFD were there it amounted to 340 man hours. He said the trucks were there for 64 3/4 hours.