PARKERSBURG, W.Va.  — The Naik group of companies has operated plastics warehouses and facilities in Wood County for more than a decade, sometimes garnering attention with new ventures.

For the most part though, buildings on Depot and Jeanette streets, Staunton Avenue, Gateman Drive near the floodwall, 60th Street in Vienna and even large facilities like the Polymer Alliance Services building in Washington Bottom and the former Ames shovel plant on Old Camden Avenue faded into the background, unnoticed by the general public.

That changed in the early morning hours of Oct. 21, when a section of the Ames plant — now owned by Naik company Intercontinental Export-Import Plastics — erupted in flames that would not be fully extinguished until eight days later. The smoke spewing from the blaze carried a noxious odor, and almost immediately, area residents were questioning what was in the building and how it would affect air quality.

Those answers are still elusive, though company officials say they have done all that’s been asked of them to comply with a West Virginia Department of Environmental Protection request to identify the contents of the warehouse at the time of the fire.

Meanwhile, the spotlight spread to other properties in the area owned by the Naik group of companies. 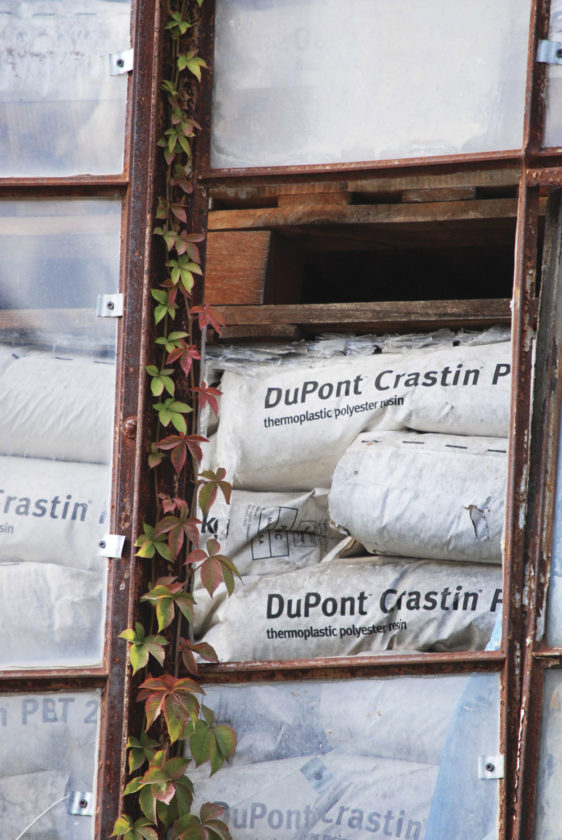 In addition to investigating the still-unknown cause of the IEI fire, representatives of the state Fire Marshal’s office have spread out to inspect a dozen similar operations in the county, not all of them owned by the Naik companies. They’ve been joined by DEP officials and, for those facilities within city limits, the Parkersburg Fire Department and code enforcement office.

While reports on the recent inspections had not been released as of Friday, Wood County records, data from the West Virginia Secretary of State’s office, research and visits to the locations provide some information about the history and current conditions of the sites.

As this section was being assembled, Sunny Naik, accounts manager for SurNaik Holdings of WV LLC, said he could not participate in an in-depth interview about the facilities until after the company’s action plan for addressing the fire site and other properties has been submitted to and approved by state and local agencies.

“We’ve complied with every level official,” he said.

All of the company’s Wood County buildings have been inspected, Naik said. While it’s been a time-consuming process, it’s important for public safety, he said.

“It’s what we want to do,” said Naik, who did answer some specific questions about the sites by email.

Parkersburg Fire Chief Jason Matthews said that, from his perspective, Naik officials have been cooperative.

“The week of the fire, they had sprinkler companies come in and give them estimates of what needed repaired,” he said.

The condition of the sprinkler system at IEI has been one of the questions about that fire. Parkersburg Utility Board records indicate it had been shut off, but Lawrence Messina, director of communications for the West Virginia Department of Military Affairs and Public Safety, said state law requires a sprinkler system to be uninstalled if it isn’t operational.

While Chief Fire Inspector Wayne White and code office electrical inspector Rick Goff continue to work on reports in conjunction with the fire marshal’s office and DEP, Matthews shared general information about some of his department’s findings. 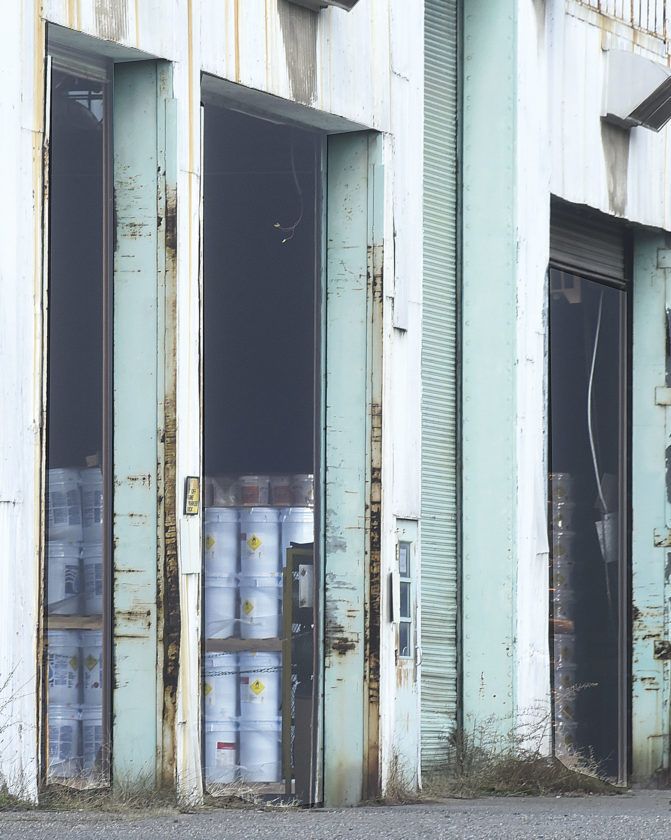 “We found some blocked exits, and we made them take care of that,” he said. “That was one of the things they were working on that day (it was noted) and finishing up the next day.”

Some sprinkler systems had not been inspected in more than a year. Private companies are to perform those inspections, Matthews said, but a fire department inspection reviews whether those processes are up to date.

“Each building would possibly have multiple sprinkler systems and some of them had issues,” he said.

Electricity was shut off at a 10-by-16-foot storage building on Gateman Drive after water was found on an electrical panel, Matthews said.

Matthews said it’s not uncommon to find at least some fire code violations, in part because inspectors might notice something employees are used to and don’t know is a problem, such as a seldom-used exit door being blocked. 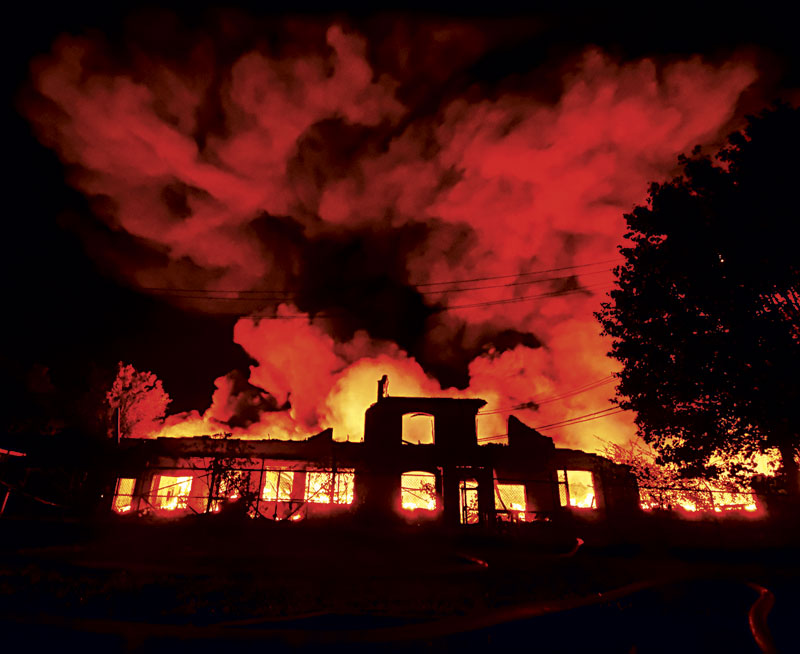 The amount of materials in the Naik buildings is what stands out most to Matthews.

“We don’t see that in every building,” he said.

The department would like to inspect large commercial buildings like these annually, Matthews said, but the budget and manpower to do so isn’t there. White is the only full-time fire inspector now, and in 2013, 2014 and part of 2015, there wasn’t a designated inspector. Parkersburg Fire Capt. Tim Flinn, who had previously served as chief inspector, handled inspections for new business but “that’s all that was getting done,” Matthews said.

A Freedom of Information Act request for previous inspections of the building was submitted to the city, but as of Friday, it had yielded only three results. Two of those reports were from February 2011, before facilities at 625 and 822 Depot St. were sold by the Gateman Group to Naik’s Evergreen Holdings.

Matthews said he continues to look for other reports, but the lack of a designated inspector and changes over the years have made it difficult to locate some of those records promptly.

Parkersburg Code Director Gary Moss said his office had not had much contact with the facilities and typically doesn’t unless the use of the building or occupancy changes.

A Freedom of Information Act request to the state Fire Marshal’s office about past inspections of Naik properties is being considered, state officials said.

Some packages stored in the facilities are visible through open doors and clear or broken windows from public streets and sidewalks. Attempts were made to contact companies whose names and logos were seen.

Among the items were packages labeled with the DuPont name and materials including Zytel, acetal and Crastin thermoplastic polymer resin PBT.

Daniel Turner of DuPont corporate media relations said the company does not have any direct affiliation with the warehouses. Some of the materials were purchased from DuPont by IEI, he said.

“We do not know how IEI stored product and had no control on their distribution once IEI took ownership,” Turner said.

Other containers bore the name of SABIC, which shut down operations of its Washington Bottom location — previously the home of Borg Warner Chemicals and GE Plastics — in 2015. No product names were visible.

Officials with SABIC said they are not renting space in any local buildings and are no longer storing materials in West Virginia. Those containers could be materials someone bought from the company previously or someone could be using their old containers to store things, said Shelia Naab, spokeswoman for SABIC.

“I would like to clarify that SABIC does not own any material stored at the IEI Plastics warehouse,” said Susan LeBourdais, communications business partner with SABIC Corporate Affairs.

Wally Kandel, senior vice president and Marietta site manager for Solvay Advanced Polymers, said that company had no material in the IEI warehouse either but does have a relationship with Polymer Alliance Services.

“We’ve used a couple of their services off and on over the years,” he said. “Right now they have one truckload of our materials.”

Kandel said Solvay supplies PAS with pellets, which the company sorts and checks.

“Then they return 100 percent of that material,” he said.

Keith Burdette is chief executive officer of the Polymer Alliance Zone, a private nonprofit that works to support polymer businesses and related companies in Wood, Jackson, Mason and Pleasants counties. Although he had not been in the former Ames plant in about a decade, Burdette said conditions in warehouses owned by the PAZ and other area companies are different from the reports he’s heard about IEI’s facility.

“I don’t think other Polymer Alliance Zone warehouses are like this,” he said. “Ours are wide-aisled, well-maintained and well-organized.

“I don’t know if they (IEI) were doing it right or wrong. Ours are fully sprinkled, safety conscious. It compares to what I’m used to with big, sophisticated warehouses,” Burdette said. “They take safety very seriously.”

Companies who don’t “got a big wake-up call” with the IEI fire, Burdette said.

As collection of “After the Fire” stories appeared in the Sunday, Nov. 12 paper.  See the collection online at The Parkersburg News and Sentinel