BECKLEY, W.Va. — When the first trailer for Bethesda’s latest installation in the Fallout franchise surfaced in late May, West Virginians took to social media to show their excitement. That excitement of course was spurred by the sound of “Take Me Home, Country Roads” playing in the background.

Following an announcement last Sunday at the E3 conference – where video game companies and developers meet to announce anticipated news or their slate of games for the year – the excitement and anticipation of those waiting on the game, titled “Fallout 76,” went through the roof. The E3 trailer featured shots of The Greenbrier, the State Capitol and the New River Gorge among various notable West Virginia landmarks.

The game itself, which features several installments, takes place during the 22nd and 23rd centuries in a post-apocalyptic era following a nuclear fallout. In the game, the transistor was never invented while atom physics became the craze in the advancement of technology. In addition to that, the hysteria surrounding the Cold War and nuclear warfare never died down and the government spent trillions of dollars building vaults, which serve as bunkers. 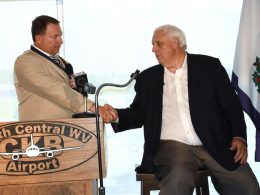 By Rick Steelhammer, The Charleston Gazette-Mail CHARLESTON, W.Va. — Managers of the second Kanawha County golf course to be…
byDon Smith

By JESS MANCINI The Parkersburg News and Sentinel PARKERSBURG, W.Va. — The first-ever nationwide study of the health…
byDon Smith