BOAZ, W.Va.  — The annual Civil War Re-enactment Weekend will be Saturday and Sunday at Henderson Hall on Old River Road at Boaz.

The event is put on by Henderson Hall in association with Carlin’s Battery D of Artillery and Western Virginia Artillery.

The re-enactment is free and open to the public, although donations of canned goods would be appreciated. Mansion tours of Henderson Hall will be $10 for adults, $5 for ages 7-12 and free for children ages 6 and under.

Those attending the two-day event are advised to arrive early to ensure a spot in the parking lot, said Henderson Hall Director Randy Modesitt.

Wrapped in history, the Victorian-era Italianate Henderson Hall Plantation is one of the few surviving, intact historic homes in the U.S. listed on the National Register of Historic Places. It contains artifacts and historical treasures preserved through more than 200 years of the Henderson clan. The Hall and its environs are open to visitors from March through December, Tuesday through Sunday, from noon to 5 p.m.

The Civil War called on many to make sacrifices and sometimes caused strife between family members on differing sides, and the Hendersons were no exception. Family patriarch George Washington Henderson was elected in 1861 to serve in the Wheeling Convention.

He was one of 70 delegates from Wood County. A December 1862 letter from G.W. to his wife Elizabeth in part reads: “We got the news yesterday evening of the passage of the act admitting the State of West Virginia to the Union which was hailed with the firing of 35 guns and many muskets. This session will close, I think, next week, and an adjournment is to be made to Alexandria, to commence sometime in the fore part of January, with the probability of remaining a few weeks and then bidding farewell to Old Virginia.”

Son G.W. Henderson Jr. joined the Union Army and was stationed for a time at Camp Chase. He became ill at the camp and returned home. He died of typhoid fever around Christmas time in 1863. G.W. Jr.’s outspoken support of the Union caused a rift between himself and his sister Mary Page, who was married to Benjamin Beeson, a Southern sympathizer, and there are a number of letters in the archives exchanged during the war.

There are also letters written to the Hendersons from friends serving in the Civil War with details of battles and the everyday struggles of the soldiers. Among Henderson Hall archives are what were then called “tickets,” or ballots, from the 1860 presidential race.

The Hall has letters signed by Robert E. Lee when he served as president of Washington and Lee University in Lexington, Va., after the war.

Son A.T. Henderson knew Lee and attended Washington and Lee College; he and brother Jock, who was a cadet at VMI, attended Lee’s funeral. Family matriarch Elizabeth Henderson often donated money to Parkersburg hospitals set up to care for wounded soldiers and was known to invite Union soldiers on patrol to come in and have a meal.

The schedule of activities

Prior to Saturday’s kickoff, there will be a camp setup on Friday.

By JOHN DAHLIA The Fairmont News FAIRMONT, W.Va.  — The I-79 Technology Park is listed as one of four…
byDon Smith 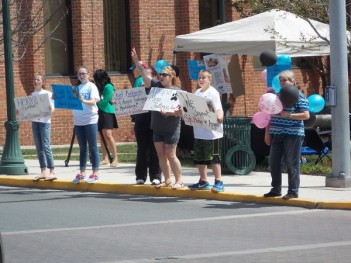 MARTINSBURG, W.Va. — Family and friends had to console a sobbing Melonie Phelps on Monday as she…
byBrian Canterbury