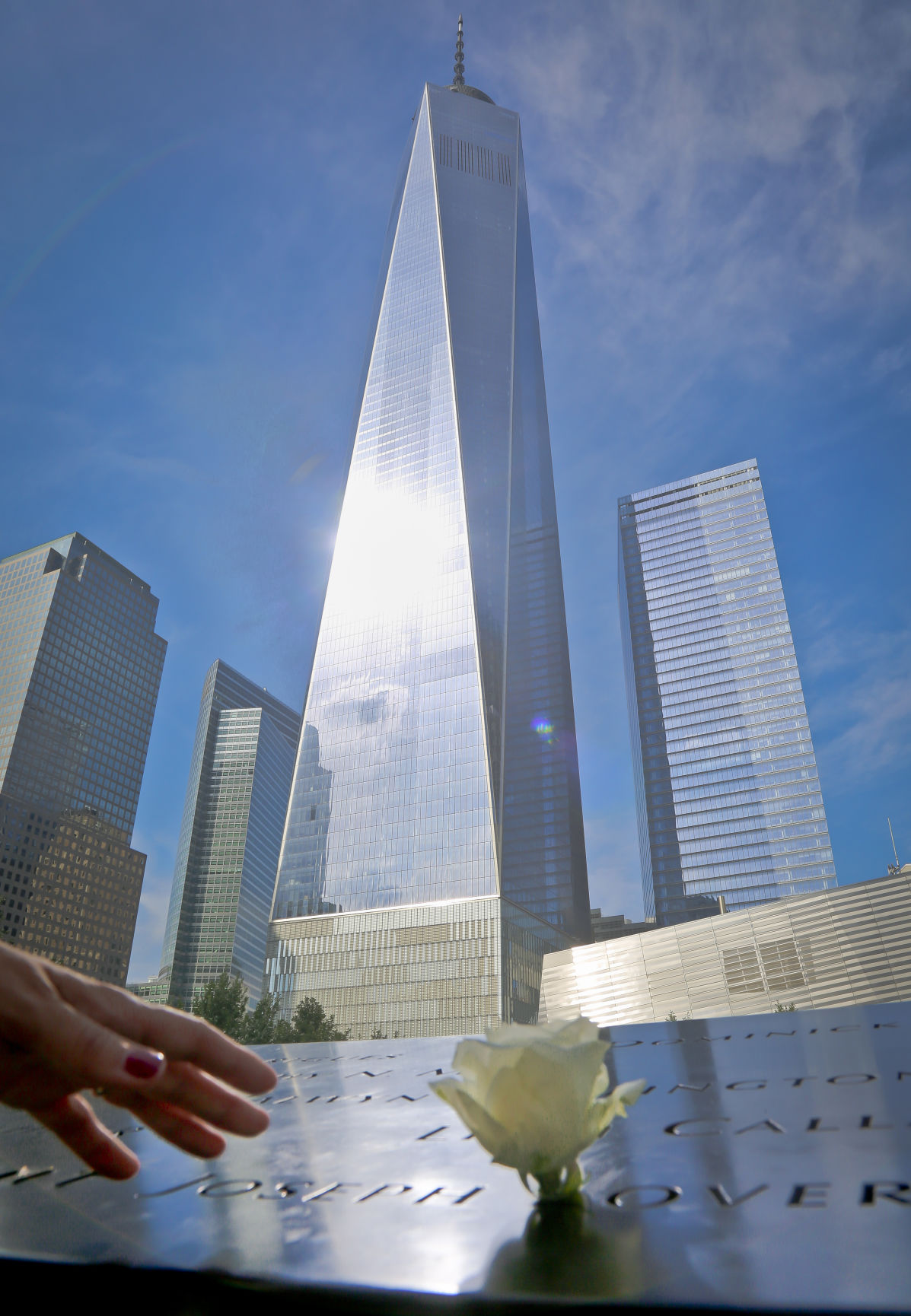 A visitor reaches to touch a name engraved at the Sept. 11 memorial site to remember the victims of the 2001 attacks on the World Trade Center, Thursday Sept. 8, in New York. Sunday marks the 15th anniversary of the terror attacks.
By GREG JORDAN
Bluefield Daily Telegraph

BLUE FIELD, W.Va. — There are moments in American history that stick with the people who experienced them. The men and women of one generation never forgot where they were and what they were doing on Dec. 7, 1941, when they learned about the sneak attack on Pearl Harbor. Another lasting moment came on Nov. 22, 1963 when President John F. Kennedy was assassinated in Dallas. And now there are the people who will always remember where they were on Sept. 11, 2001, when they first heard of a jet hitting one of the Twin Towers of the World Trade Center in New York City.

People who gathered Thursday in downtown Bluefield for Patriot Day ceremonies in Chicory Square still remembered the terrorist attacks that occurred on Sept. 11, 2001 and how they changed the world as they understood it. One veteran attending the ceremony remembered 9/11 as the second time the United States was suddenly attacked. The first time was the sneak attack against the Pacific Fleet stationed at Pearl Harbor.

Howard Candler, now 91, still wears a ball cap with the numbers and insignia of the battleship U.S.S. Wisconsin. He was a new sailor and a “plank holder,” a member of the warship’s first crew, when that vessel entered service during World War II. He was not at Pearl Harbor when it was attacked, but he saw the devastation the bombs and torpedoes had inflicted on the Navy’s warships and the nearby airfields when the Wisconsin arrived in Hawaii.

“We were there to join the Third Fleet,” Candler recalled. Tension was still high in the attacks aftermath. “An officer made an announcement, keep your eyes and your ears open, because we were in enemy territory.”

Like the assault on Pearl Harbor, the terrorists’ actions in 2001 were a sneak attack. The memories of Sept. 11, 2001 are just as strong.

Another Bluefield resident, 66-year-old Jack Thompson, remembered being off work during 9/11. He was watching television when there was a report about a plane hitting one of the Twin Towers; there was an announcement that the show would resume live at the scene.

“By the time they went live, the second had hit it and we knew something wasn’t right,” Thompson said, who added that he was living in Florida at the time. What the tragedy of that day means for each person depends on what they witnessed personally and how it impacted them, he said.

“I have a friend in New Jersey who was one of the first responders. I know she’ll have memories about it,” he stated.

Bud Acken, a local businessman, said he was at the Mercer County Airport when he first learned something was happening. He was aboard a plane piloted by Bill Cole, another businessman; they were about to take off for a flight to Danville, Ill.

“We had been cleared for takeoff, when all of a sudden he got a cancellation notice. His flight plan was canceled and we were not to depart,” Acken said. “Three private aircraft landed right after that. Boom, boom, boom.”

An order had gone out to ground all aircraft. Soon pilots and passengers were watching the events of 9/11 unfold on television.

“We just sat there and watched in amazement. We saw them (towers) come down, and it’s going to happen again if we don’t have an administration who thinks terrorism is a threat to our country,” Acken said.

America became more unified for a time after the 9/11 attacks, but memories change as the years go by and the news changes, he said.

Maureen Bailey, 57, of Bluefield was watching television when the news of the attacks were first aired.

Brittany Rose, 30, of Northfork said she was in the 10th grade on Sept. 11, 2001. She had just settled into her home economics class when a television was turned on and a teacher told her and the other students to pay attention.

“We saw the second plane hit the building. Even as it hit, we asked ourselves how people could do that to other people,” Rose said. “It was a shock even as a kid that somebody could do that. We mourned for the families because in the US, that’s how we feel about each other.”