The regional bureau of The Associated Press, shares 10 things you need to know Monday, July 17, 2017. Look for full stories on these late-breaking news items and much more in West Virginia newspapers.

A group of family and friends was enjoying a summer afternoon, cooling off in a creek when a rainstorm in Tonto National Forest turned gentle waters deadly.

The proposal against the president’s plan to rewrite the constitution raises tensions in a nation suffering through widespread shortages and months of anti-government protests.

Seoul offers to talk with Pyongyang to ease animosities along their tense border and resume reunions of families separated by their war in the 1950s.

Running a school in the enclave controlled by Syria’s al-Qaida affiliate, a Syrian-American woman is skilled in getting her way, either by negotiating with militants or plain pushing back.

5. YOUR SPEECH MAY REVEAL IF YOU’RE DEVELOPING THINKING PROBLEMS

More pauses, filler words and other verbal changes could be an early sign of mental decline, which can lead to Alzheimer’s disease, research suggests.

6. WHAT MICHAEL FLYNN HAS BEEN UP TO

The former national security adviser, at the center of multiple probes into Russia’s election interference, seeks sanctuary in the Rhode Island beach town where he grew up.

They’d rather “play the odds” and go without insurance, posing a major problem for a Republican plan trying to entice them to sign up.

From hiking trails to playground grass, to waterways to baseball dugouts, syringes left by drug users amid the heroin crisis are turning up everywhere.

George Romero, whose classic “Night of the Living Dead” and other horror films turned zombie movies into social commentaries, is dead at 77.

Soon to be 36, the Swiss tennis star won his record-breaking eighth Wimbledon championship and second Grand Slam title of this resurgent season. 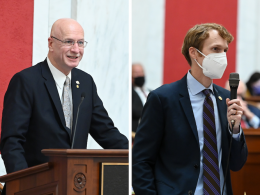 From the Hampshire Review:  We realize that calling for bipartisanship and tough choices in an election year has…
byDon Smith

MARTINSBURG, W.Va. — Though lottery fever swept the state as the Powerball jackpot climbed to more than $1…
byBrian Canterbury