PARKERSBURG, W.Va.  — Wood County Schools are closed today because of the Ames Plant fire which broke out early Saturday morning in south Parkersburg.

School Superintendent John Flint said school and county officials met Sunday afternoon to review the situation and decided to cancel classes due to weather forecasts and concerns about the smoke and emissions.

“We’re closing everything down,” Flint said, citing concerns about forecasts for a half-inch of rain expected today and how that might impact the smoke emissions and air quality in the area.

School officials plan to meet again today with county and emergency services to decide about Tuesday classes and beyond. 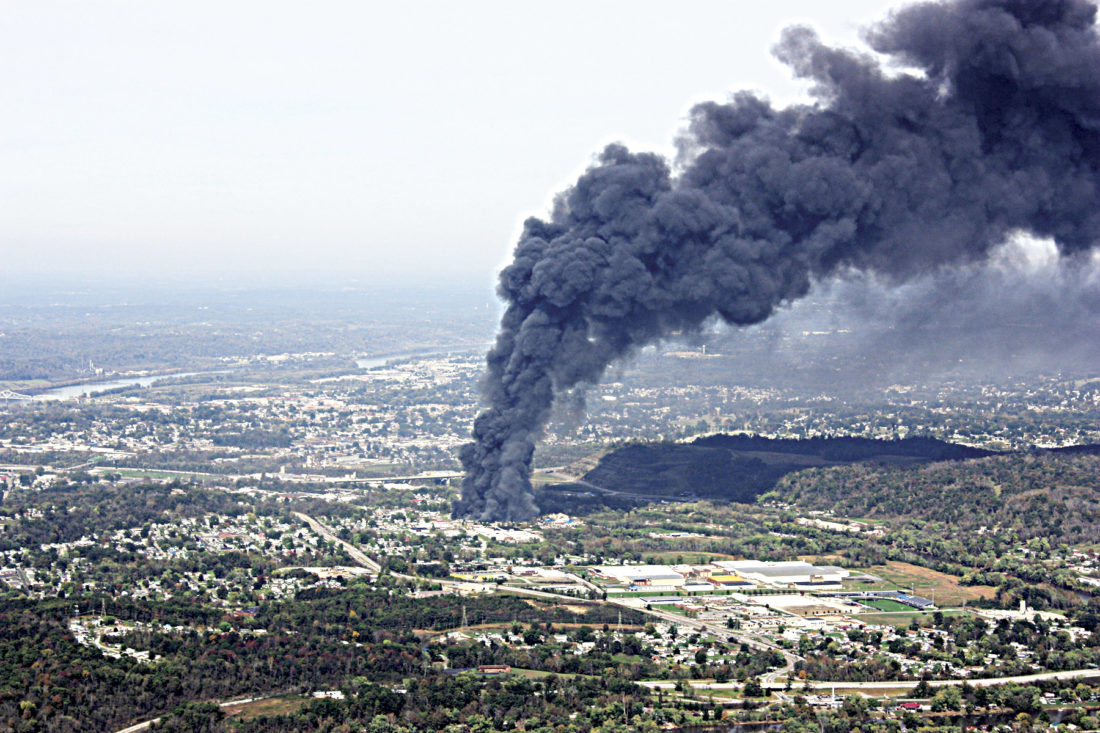 Photo courtesy of Ray Hollen An aerial view of the Ames Plant fire taken Saturday by local pilot Ray Hollen. The smoke plume stretched for miles to the north and west of its source on Old Camden Avenue in south Parkersburg. Firefighting efforts continued Sunday and are expected to last for several days.

West Virginia University at Parkersburg announced Sunday evening that its main campus would be closed today until 11 p.m. The Board of Governors will meet as scheduled at 4 p.m. today.

Due to the anticipated change in weather conditions at the fire site, officials said the smoke cloud could be driven closer to the ground affecting homes in the immediate area. For those persons that may be affected or prefer to avoid those conditions, the American Red Cross established a voluntary shelter at the South Parkersburg Baptist Church at 1655 Blizzard Drive, Parkersburg, on Sunday evening.

With efforts to fully extinguish the fire and suppress the smoke rising into the air expected to take several days, among the many ongoing challenges facing officials are the water supply and manpower. 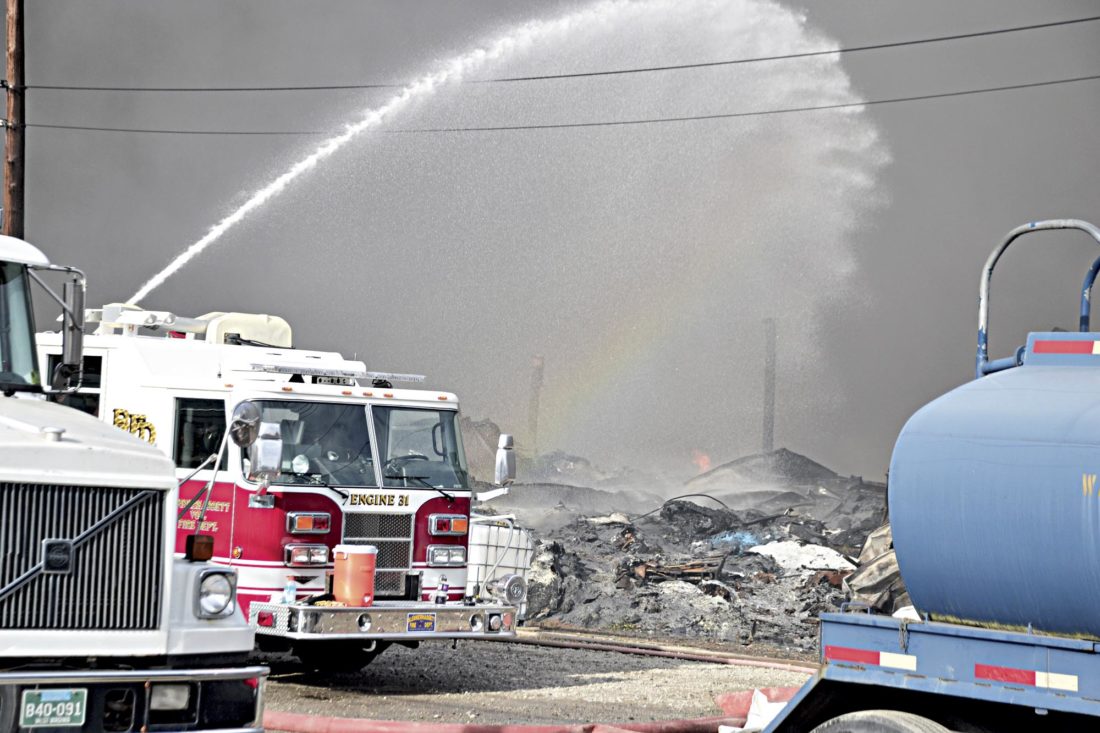 Mark Stewart, chief of the Lubeck Volunteer Fire Department and incident commander, said about 10 million gallons of water had been used by firefighters as of Sunday afternoon, including water from the city of Parkersburg from nearby hydrants, fire tankers shuttling water from other locations and water taken from the Little Kanawha and Ohio rivers.

Stewart said firefighters’ efforts have primarily involved spraying water on different sections of the property. At one point late Saturday night and into early Sunday morning, crews had to stop using the hydrants because the usage was draining the city storage tanks, he said. Crews then relied on tankers shuttling water to the scene for several hours.

By Sunday morning, working with city water officials, the firefighters were able to resume using the hydrants, Stewart said. Communication was continuing through the day, with city water usage being restored and halted as needed to maintain capacity, he said.

Local departments and state agencies worked through the weekend at the site, which continued to send billowing smoke into the air for two days after the initial fire was suppressed. While the main fire was extinguished by Saturday morning many hot spots and areas that can not yet be reached due to the size of the site remained to be addressed Sunday, officials said. 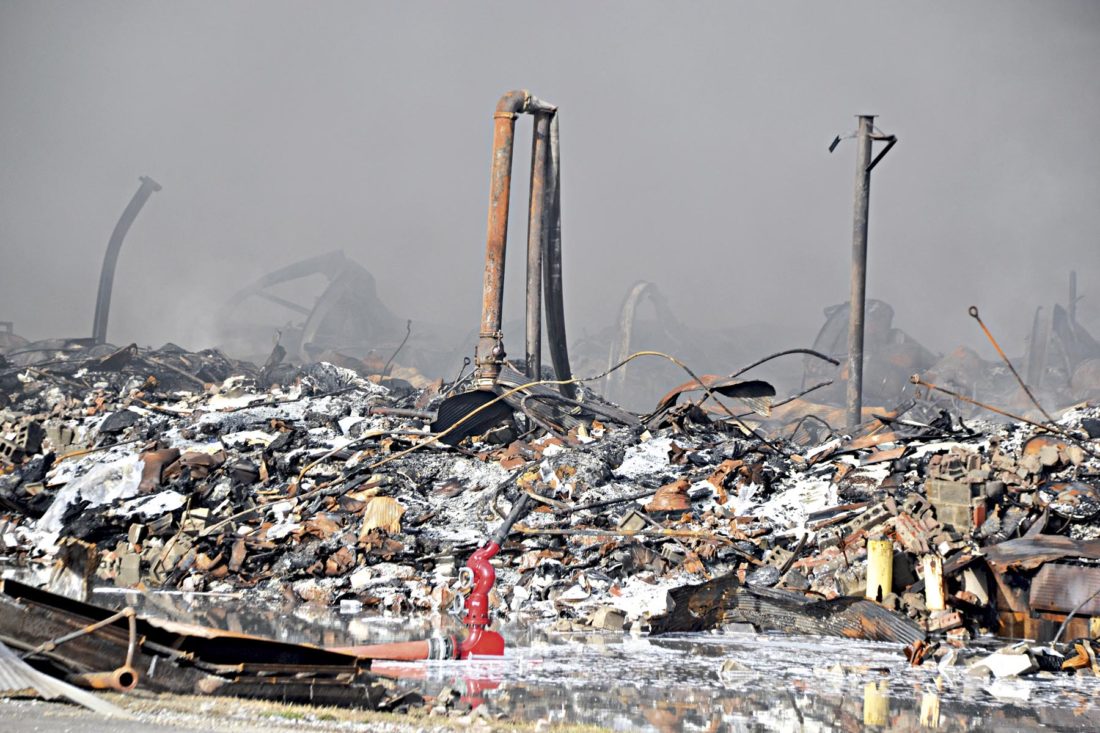 Photo by Brett Dunlap Fire departments from two states continued working Sunday at the former Ames shovel plant on Camden Avenue. As a result of the continuing smoke emissions, Wood County Schools will be closed today.

Stewart said 31 fire departments from West Virginia and Ohio were involved in the efforts. As of Sunday, some units had been sent home and more were brought to the scene.

“They’ve been rotating in and out. Most of the guys when they come spend 12 hours or more here at a time. We’re getting pretty tired and (Monday) is a work day,” he said.

By Sunday afternoon, the perimeter of closed streets had been decreased to the areas immediately around the Ames site, primarily the section of Old Camden Avenue running parallel to the plant property. Stewart said that could change periodically depending on atmospheric conditions resulting from the smoke.

No injuries had been reported since the incident began. Local hospitals were prepared for an influx of patients, if necessary, with the main concern being smoke from the fire affecting people with breathing issues. Spokespeople for Camden Clark Medical Center and Marietta Memorial Hospital reported few problems as of Sunday.