Governor, Tourism Office to lead a weeklong celebration of the state’s 156thbirthday

Press Release from the Office of the Governor:

CHARLESTON, W.Va.  – West Virginia Day is next week, and Governor Jim Justice wants all West Virginians and those who love the state to help celebrate on social media.

From Friday, June 14, through Thursday, June 20, Gov. Justice and the Tourism Office will be leading the official West Virginia Week Challenge. It’s a seven-day social challenge designed to drive engagement and inspire travel to West Virginia through daily themes and the hashtag #AlmostHeaven. Tourism attractions around the state have donated vacations as giveaways for lucky participants.

“I’ve been saying for years that we have got to tell our story,” Gov. Justice said. “We live in the most beautiful place in the world. Why on earth would you want to go anywhere else? We’ve got it all right here, and we’ve got to do a better job of telling people about everything wonderful in West Virginia.”

West Virginia Day is a state holiday marking the day in 1863 during the American Civil War when West Virginia seceded from Virginia to rejoin the Union. The holiday has become an occasion to highlight the state’s many attractions, from scenic views to local brews, whitewater rapids to snowcapped slopes.

To encourage participation, the Tourism Office will be giving away West Virginia activity passes and vacations each day, including several grand vacation packages for folks who participate in the campaign all week long.

To be eligible for the daily giveaways, participants must set their challenge posts to public and enter to win on WVtourism.com/WVDay. Participants who publicly post and enter online all seven days of the challenge will be eligible to win the grand vacation prizes on West Virginia Day.

This year’s social challenge also includes a way for West Virginia businesses to get in on the celebration. Businesses can show their love of the state and local communities by participating from their official social channels as well as encouraging their employees to participate each day. Participating businesses will be featured on the Tourism Office’s website.

Businesses can register as official participants and download a toolkit at WVTourism.com/WVDay. 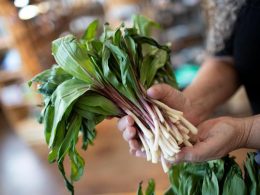 By Fred Pace, The Herald-Dispatch HUNTINGTON, W.Va. — As the spring season begins, those in southern West Virginia…
byErika Diehl

By JAKE ZUCKERMAN Charleston Gazette-Mail After an evening of shakeups, the state Senate voted to confirm all of…
byDon Smith