Release from the W.Va. House of Delegates:

CHARLESTON, W.Va. – The House Finance Committee on Tuesday evening approved the Fiscal Year 2017 budget bill that balances the budget without relying on tax increases, and fully funds the Public Employees Insurance Agency in the coming year.

“I believe this is a responsible spending plan that balances our budget without requiring any tax increases on working families,” said House Speaker Tim Armstead, R-Kanawha. “The Finance Committee and its staff are to be commended for balancing this budget through a combination of cuts and reprioritizing funds from other parts of the budget. This helps to fund our government without relying on more money from taxpayers, who are already struggling to make ends meet.”

“To say this is a tough budget year is an extreme understatement,” House Finance Committee Chairman Eric Nelson, R-Kanawha, said. “The economic collapse of our energy industries has blown a gaping hole in state revenue collections, and that’s created a tremendous structural imbalance in our budget.

Among its provisions, the House budget bill:

At the beginning of the legislative session, lawmakers were faced with closing a nearly $480 million gap for the coming fiscal year. Through a combination of budget cuts and supplemental appropriation bills that have already passed this session, legislators had cut that projected gap to approximately $102 million.

To close the remaining gap, the House Finance Committee voted to sweep roughly $72.9 million of unused appropriated funds sitting in special revenue accounts. The House of Delegates is also transferring more than $2 million in surplus funds in its accounts to help close next year’s budget gap.

“While dipping into our state’s Revenue Shortfall account is a tough decision, given the rough state of our economy and the structural budget problems that has caused, we feel this is a prudent choice at this time,” Nelson said.

“It’s important to remember that while $31 million is a large sum of money, it represents less than a third of the $100 million we took from that same Revenue Shortfall fund to balance our state’s budget two years ago,” Armstead said. “This budget will allow us to continue to provide essential government services like funding our State Police, educating our children and maintaining our roads.”

Nelson said Finance Committee members will continue to find ways to cut budgetary waste and reform the tax code in a way that grows the economy and tax base.

“Leave no doubt, more work remains to address the long-term structural imbalances in our budget,” Nelson said. “Government spending and the size of the tax base needed to support it are out of alignment, and it’s going to take a lot of work over the coming year to find a way to get our spending and revenue back in line. I think this budget plan for the coming year will afford us the time to study all the options to fix our long-term imbalances.”

“At the onset of our discussions regarding our Fiscal Year 2017 budget, we recognized there were essentially four sources of funding to fill the enormous gap caused by the downturn in our energy sector,” Armstead said. “Those sources were: cuts, tax increases, transfers of excess funds from other portions of the budget and use of the Revenue Shortfall fund. We have reached a reasonable balance of cuts, transfers and use of the Revenue Shortfall account without imposing tax increases on our fellow West Virginians, who are already struggling to make ends meet.

“Having worked hard to tighten our belt and impose reasonable budget cuts, it is reasonable for us to use a modest amount of our Revenue Shortfall account, which is essentially our state’s savings account, to help balance our budget in difficult economic times,” Armstead said.

Monroe County Sen. Mann, on education bill: “I believe in our educators”

CHARLESTON, W.Va. — The state Legislature on Wednesday moved to override a governor’s veto of a controversial anti-abortion…
byBrian Canterbury 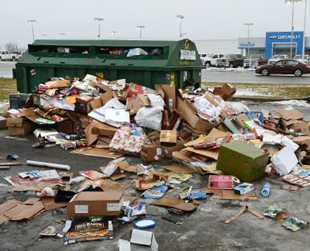