That’s because a private company failed to supply the less-toxic version that’s better suited for training, according to agency officials.

Brooke County EMS and two other Ohio Valley organizations, East Liverpool City Hospital and the Steubenville Fire Department, may have had some employees who were affected between 2012 and November of this year, according to Alexa Lopez, press secretary for FEMA’s Office of External Affairs.

None of the three Ohio Valley organizations could be reached for comment. It’s not clear how many people from each organization participated in the training.

Lopez said the West Virginia organization is among 27 organizations throughout the state whose employees may have handled the poison during training at the Centers for Disease Control and Prevention’s Chemical, Ordinance, Biological and Radiological Facility in Alabama.

About 9,600 first-responders from throughout the country were mistakenly exposed. However, not all who trained handled ricin.

Students who dealt with ricin would have been learning how to detect biological agents, and they would have worn the correct personal protective equipment against exposure, Lopez has said.

Since 2012, when West Virginia organizations sent employees for the training, about 62 students from January 2012 through November listed their home state as West Virginia on their course registration form, according to a prepared statement from Lopez.

Agency staff discovered the private company’s error last month when they were looking over purchasing documents that described the poison that had been delivered. Those documents showed that, since 2011, the more-toxic version had been sent for the training.

Ohio and West Virginia students could have handled it beginning only in 2012, Lopez said.

Ricin is a poison found naturally in castor beans, according to a fact sheet on the CDP’s website. Although chewing and swallowing castor beans can be poisonous, the beans are processed into castor oil.

Ricin can be made from the waste from processing castor beans, according to the CDP.

The agency is investigating, and has stopped all its chemical and biological operations through January.

Justice announces session will be extended one day for budget resolution

By WENDY HOLDREN The Register-Herald Gov. Jim Justice, seated at a desk with two empty plates — a…
byDon Smith 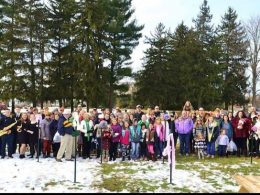