FAIRMONT, W.Va. — With 2017 upon us, the tradition of resolutions, especially as they pertain to weight loss, have not been lost.

According to a PollFish survey, eating healthier and exercising more ranked as the No. 1 resolution of 2017. Weight loss resolutions came in at No. 3.

Angela Hammond has practiced yoga for about 20 years and owns Main Street Yoga in downtown Fairmont.

She said her past resolutions may have included losing 10 pounds or being more financially responsible. When she started deepening her yoga practice, she said, her outlook began to change.

“It’s more about setting intentions rather than resolutions …  Sometimes people feel like if they break those resolutions, then it’s done. It’s over,” Hammond stated. “Whereas intentions are a little more forgiving.”

She said people forget about taking care of themselves and far too many times rely on pills, shakes or “whatever the new magic potion is.”

“They have that exterior goal and they’ll do it at any cost. And that’s not the best way to go about it,” Hammond commented.

Aside from yoga releasing stress in an individual, she said it also puts you in a different mindset.

“You discover the good qualities about your body rather than focusing on negative aspects about it,” she explained.

Patricia Parker, owner of Health Naturally, said she doesn’t pay too much attention to resolutions, but has seen many people throughout the new years wanting to lose weight.

She said that when it comes to weight loss, if the mindset is not a lifestyle change, it’s not going to work.

One thing she does for her customers wanting to lose weight is determine what kind of an eater he or she is.

“For instance, there’s a stress eater. They get stressed and they start eating,” Parker explained. “There are other people that are so nutrient deficient that there body is looking for some kind of nutrition, but they never get it. So they just keep eating and eating and eating.”

Parker continued, “There’s not a quick fix for weight loss … because it’s not easy to do. If it were easy to do, nobody would be fat.”

Parker commented that nobody wants to be sick, but very few people would do what it takes to be well.

As well, she mentioned ways of eating such as the ketogenic diet, the paleo diet and Whole30 as healthy ways of accomplishing a weight loss resolution.

“You get up in the morning, you brush your teeth and comb your hair because you know it’s the right thing to do,” he explained. “A fitness routine is something of the same value.”

Gardner said he has noticed the medical community beginning to extoll the value of exercise in a society that has become increasingly inactive, noting that “inactivity breeds inactivity.”

He said for some people, life gets in the way and it becomes difficult for them to stick with their resolutions. Although it is a challenge to sustain it, he said, exercise can cause people to “skyrocket out of the risk zone” for various diseases and health issues.

For people who have not been exercising and maintaining a healthy lifestyle, he said, “After a lifetime of so-called neglect and maybe a little bit of damage, I can’t fix you overnight,” he stated. 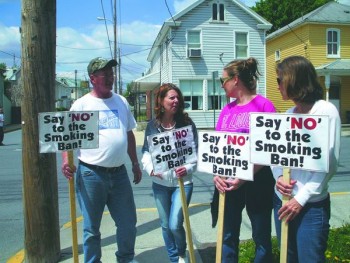 MARTINSBURG, W.Va. — Local residents who are concerned about a proposed ban on public smoking that’s being considered…
byBrian Canterbury