Wave after wave of civil rights struggles have moved the United States closer to its aspirations. In the early 20th century, many thousands of black Americans left Southern states, fleeing lynching and economic and political suppression. They found jobs in the industrial north, built businesses and neighborhoods, and changed the country.

By the mid-20th century, among the most celebrated black leaders was Martin Luther King Jr., who espoused peaceful resistance. Following his example, Americans dismantled its apartheid system and learned better ways.

The holiday to honor this martyred American leader is an excellent time to pause and remind each other of ideals that define the country, such as “all men are created equal.”

As usual, we reprint some of King’s statements so they continue to inform and inspire people as they toil on their “more perfect union.”

“I have the audacity to believe that peoples everywhere can have three meals a day for their bodies, education and culture for their minds, and dignity, equality and freedom for their spirits. I believe that what self-centered men have torn down, men other-centered can build up.” — Nobel Prize acceptance speech, Dec. 10, 1964nnn

“A nation or civilization that continues to produce soft-minded men purchases its own spiritual death on the installment plan.” — quoted by former Rep. Nick Rahall, D-W.Va., in his newsletter

“If you will protest courageously, and yet with dignity and Christian love, when the history books are written in future generations, the historians will have to pause and say, ‘There lived a great people — a black people — who injected new meaning and dignity into the veins of civilization.’” — address at Montgomery, Alabama, Dec. 31, 1955nnn

“It may be true that the law cannot make a man love me, but it can keep him from lynching me, and I think that’s pretty important.” — The Wall Street Journal, Nov. 13, 1962

“The hope of the world is still in dedicated minorities. The trailblazers in human, academic, scientific and religious freedom have always been in the minority.” — quoted by the Council for Secular Humanismnnn

“I have a dream that one day on the red hills of Georgia, the sons of former slaves and the sons of former slaveowners will be able to sit together at the table of brotherhood. … I have a dream that my four little children will one day live in a nation where they will not be judged by the color of their skin, but by the content of their character.” — address at Lincoln Memorial during a march on Washington, Aug. 28, 1963nnn

“The church must be reminded that it is not the master or the servant of the state, but rather the conscience of the state. It must be the guide and the critic of the state, and never its tool.” — 1963

“Before the Pilgrims landed at Plymouth, we were here. Before the pen of Jefferson etched across the pages of history the majestic words of the Declaration of Independence, we were here. If the inexpressible cruelties of slavery could not stop us, the opposition we now face will surely fail.” — address at Birmingham, Dec. 31, 1963•••

“I submit that an individual who breaks a law that conscience tells him is unjust, and who willingly accepts the penalty of imprisonment in order to rouse the conscience of the community over its injustice, is in reality expressing the higher respect for the law.” — “Why We Can’t Wait,” 1964

“Nonviolence is a powerful and just weapon… which cuts without wounding and ennobles the man who wields it. It is a sword that heals.” — “Why We Can’t Wait,” 1964•••

“If physical death is the price that I must pay to free my white brothers and sisters from a permanent death of the spirit, then nothing can be more redemptive.” — after learning of death threats, St. Augustine, Florida, June 5, 1964

“A sound and good decision reaffirming something that is basic in our constitution: namely, separation of church and state.” — commenting on the historic 1962 U.S. Supreme Court ruling that banned government-enforced prayer in schools•••

“I believe that unarmed truth and unconditional love will have the final word in reality. This is why right, temporarily defeated, is stronger than evil triumphant.” — Nobel Peace Prize acceptance speech, Dec. 10, 1964

“The ultimate weakness of violence is that it is a descending spiral, begetting the very thing it seeks to destroy. Instead of diminishing evil, it multiplies it. … Violence merely increases hate.” — “Where Do We Go From Here?” (1967)•••

“Discrimination is a hellhound that gnaws at Negroes in every waking moment of their lives to remind them that the lie of their inferiority is accepted as truth in the society dominating them.” — address to the Southern Christian Leadership Conference, Atlanta, Aug. 16, 1967 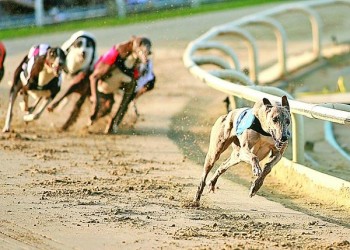 Greyhounds could be at risk if racing subsidies end

WHEELING, W.Va. — The answer to “who let the dogs out” could be West Virginia lawmakers if legislation…
byBrian Canterbury