2 minute read
Inter-Mountain photo by Nick Martin State officials load a 25-year old blue spruce donated by Ed and Jenny Dumiere for use this Christmas at the governor’s mansion in Charleston.
Total
0
Shares
0
0
0

BEVERLY, W.Va. — It’s beginning to look a lot like Christmas, at least at the governor’s mansion in Charleston.

That is where a 25-year-old blue spruce from Ed and Jenny Dumire of Beverly now will “reside” as West Virginia’s first family’s official Christmas tree.

The tree was harvested Tuesday from the Dumires’ property on Scotts Lake Road.

Jenny Dumire said she and her husband are honored their tree was chosen.

“We planned on cutting the tree down but are ecstatic that it has such a great purpose,” she said.

This is the second time this tree has been given as a gift, making it aptly suited for its holiday purpose. Betsy and Ted Harnden are the Dumires’ neighbors and had gifted the couple with the tree all those many years ago. Betsy Harnden’s father owned a Christmas tree farm in Rock Cave. She brought seedlings to her new home and planted the seeds on her land.

Those seeds grew into saplings.

“Ed (Dumire) used to brush hog the field and loved the trees, so I gifted him a sapling,” Betsy Dumire said.

In sharing the tree with the state of West Virginia, he has returned her favor.

“Betsy loves that her tree is going to be represented as the governor’s Christmas tree,” Ed Dumire said. “It means so much because she knows her father would have loved the tree to be at the capital.”

Lynn Phillips, the regional representative for Gov. Earl Ray Tomblin, said he selected this particular tree for recommendation to the first lady’s office for a variety of reasons.

“This tree was special because of the height. I know the history of the tree and where it came from,” he said as the tree was felled and prepared for shipment to Charleston.

It will be set up for display on the south side of the governor’s mansion through the holiday season. 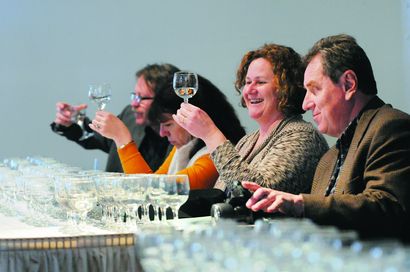 Morgantown pool goes to the dogs, 188 of them

MORGANTOWN, W.Va. — Animal Friends and the Morgantown Utility Board put together the festivities that had the pool…
byBrian Canterbury