Jeremy Lewis pilots a drone some several hundred feet in the air to photograph familiar Ohio Valley sights from a vantage point not ordinarily accessible.

He said this activity, now a side business owned and operated as Flying Dreams Aerial Imaging Services, stemmed not from an interest in photography but an obsession with flight he’s had since childhood. Once up there, he believed he had to capture those images to see a river valley as something magnified, not plain.

“I’m not envying some place I’m not,” Lewis said, referring to glossy shots of exotic locations. “That’s right down the road.”

Real estate photography is another option. It’s a relatively new venture, but he believes the idea makes sense when one considers the commitment required to shoot footage from a drone.

Flying for recreation is typically easy to do, so long as one owns the device. Lewis said when money is involved, though, the Federal Aviation Administration must regulate the process. Lewis obtained a Part 107 Certification for small, unmanned flying objects by passing a test in Pittsburgh. He also holds a specific waiver to fly at night, which is usually forbidden.

He said the test is fairly difficult to ace and requires extensive preparation. With this the case, someone in need of an aerial shot would likely prefer to hire an individual already equipped.

Lewis said the obvious aspect of height makes his images of the Ohio Valley different than others, but he said his stylistic spin lends personality to his shots.

A fair amount of Lewis’ still work engages with local scenes in the twilight of sunrise and sunset.

This decision imbues a sense of motion to the valley’s stationary hills.

Lewis, of Colerain, said his appreciation for the local topography was found in a trip to Hawaii with his wife. Out there, seeing sights from mountain peaks, he said the basic image of Hawaii’s river valleys simply resembled home. He acknowledged that their beauty originated from some notable differences, but said the premise was similar.

Lewis said despite the Ohio Valley’s poor self-esteem, he’d like to remind residents of what they possess, or catch them off guard and have them completely reconsider their instated perception.

With the aid of an unmanned aircraft, he may do it.

For more information on Flying Dreams Aerial Imaging Services, call Lewis at 740-359-3974, email him at [email protected] or visit flyingdreamsimaging.com.

A lot of fun, a little fear on the New River 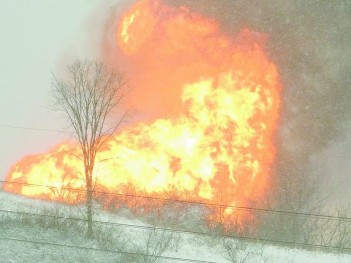