{span}WVU Vice President and Executive Dean for Health Sciences Clay Marsh said the goal behind this neuroscience center is to maximize efficiency and better serve patients by bringing together multiple fields that are related but have in the past worked separately from one another.

“Instead of building neurosurgery and neurology and behavioral health and physical rehabilitation as separate units, we want to interdigitate them,” Marsh said. “In today’s world, things don’t really operate only in different sort of vertical threads. They operate so that when people come here, they want their problems solved.”

Albert Wright, president and CEO of WVU Medicine, said the neuroscience center was designed this way with a primarily rural patient base in mind. If those patients have to drive four hours to reach Morgantown, he explained, the goal is to take care of all their problems in as few visits as possible.

To help with the center’s mission, WVU Medicine recruited neurosurgeon Dr. Ali Rezai, of Ohio State University, to serve as leader of the comprehensive and integrated clinical and research programs of the neuroscience center

Wright said Rezai will start in November and that’s when the neuroscience center will begin its functions. He said Rezai’s recruitment was a two-year process. He’s one of some 200 physicians WVU Medicine has recruited from outside the state in recent years.

“People have asked me ‘why would you leave to go to West Virginia?’” Rezai explained. “The answer is it’s a unique place with great opportunities. There’s something very special brewing in West Virginia.”

Rezai added that Wright, Marsh and WVU president E. Gordon Gee are visionaries and working together, they can make big impacts.

Rezai said understanding and combating addictive behaviors to address West Virginia’s opioid crisis are among his priorities. An example of how to do this, he explained, is the insertion of a small pellet half the size of a rice grain that slowly delivers non-opioid pain medication over the course of a year.

“We can break the cycle of addiction at it’s root,” the neurosurgeon said, adding that many of the techniques he wants to employ in West Virginia have taken off elsewhere.

Among these are collaborations with engineers and programmers to bring technology and medical science closer together such as using virtual reality programs to improve motor functions and even helping quadriplegic patients move their fingers.

The partnerships don’t stop there. Rezai said there’s opportunities for the WVU College of Business and Economics to jump in and explore methods of commercializing new neuroscience breakthroughs and for the university’s athletic department looking to improve the health and performance of its players. Joint projects with the Air Force Research Laboratory to improve veterans’ health is also on the table.

Marsh described all these different experts coming together through the neuroscience center as “the chocolate and the peanut butter that makes a Reese’s cup.”

FAIRLEA, W.Va. — It may only be the second day of the exposition, but the first Saturday of…
byBrian Canterbury

Advertisers who are cutting back on newspaper advertising are missing a beat. This is the message of a…
byBrian Canterbury 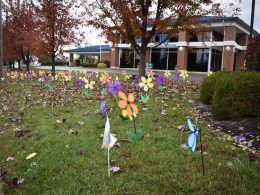 By Jessica Wilt, The Journal MARTINSBURG, W.Va. — With planning season nearing for the West Virginia chapter of…
byErika Diehl