WHEELING, W.Va. — Employees and patrons of Wheeling Island Hotel-Casino-Racetrack and limited video lottery outlets are urging the Wheeling-Ohio County Board of Health to keep in place those facilities’ current exemption from the county’s clear air regulation.

The board conducted a public hearing Tuesday as part of its review of the revised and expanded clean indoor air regulation that took effect in March 2016.

Last week, Wheeling City Council voted 6-1 to recommend the board study the economic impact on businesses if the exemptions were eliminated. Dr. John Holloway, board chairman, said Tuesday, “I say respectfully that it (a study) is not possible for us to do. It’s not the role of the board of public health, and we don’t have the resources.”

Holloway said, “Is there this huge economic impact? It has not been clearly demonstrated. That is why we are looking to get more information from the casino.”

Twelve speakers at the hearing asked the board to retain the current exemption that allows smoking in specified areas at the casino and in limited video lottery rooms. They cited concern for potential loss of revenue and employment that might result from a smoking ban at gambling establishments.

However, Christina Mickey, regional coordinator of a tobacco prevention program in West Virginia, said it is “nearly impossible to single out one factor” responsible for businesses’ loss of revenue and employees. She told the board, “The movement across the nation is going smoke-free. We can urge you to move ahead and go smoke-free.”

“It’s critical that Wheeling Island has the ability to generate that revenue,” she said. “Any compromise could critically jeopardize our existence in this community long-term.”

She said a 19.2-percent drop would equate to a loss of $17.5 million for Wheeling Island.

“That’s three times as much as the greyhound breeders’ fund was going to contribute to the state budget,” she said.

Such losses could result in “a huge decline in payroll,” with roughly 140 employees to be cut from Wheeling Island’s current ranks of about 600 workers, Florence warned.

Leslie Bond, legislative director for United Food and Commercial Workers Local 23, said, “It’s jobs in my world that depend upon it (the casino). … Wheeling Island has lots of smoke-free areas for workers and guests.”

Jason Panepucci, a shift supervisor on the casino floor, said, “I don’t want to see any of my friends or co-workers lose jobs. We’ve made a big comeback. … Customers say they choose us because of smoking.”

Regarding a potential ban, Tim Napolitan, a slot attendant on the casino floor, said, “It scares me that this is something that could be a reality soon. … It worries me.”

Mary Cox, the casino’s marketing manager, said, “We (employees) choose to go in there, as do our guests. … They’re adults.”

Anthony “Herk” Sparachane, president of the West Virginia Amusement & Limited Video Lottery Association, said the board “did it right and gave our businesses a chance” by creating the exemption.

Lisa Lucas, a non-smoker, predicted small bars with video lottery rooms would be hurt by a smoking ban. She said, “We’re adults. We should be able to make our own decisions.”

Mickey said 33 of West Virginia’s 55 counties have eliminated smoking indoors since 2005. She said, “The trend is still moving toward smoke-free workplaces.”

Dr. William Mercer, county health director, said economic data depends on which study is examined. “It’s not a given that this (a smoking ban) is a negative impact,” he said.

Holloway said, “It’s been the goal of this board for many years that Wheeling and Ohio County be entirely smoke-free, which fulfills our mission statement for public health in this community. The purpose of these regulations is that people not be affected by second-hand smoke. The evidence is irrefutable that second-hand smoke causes illness and causes harm.”

Noting that the board’s next regular meeting is May 9, Holloway said, “Perhaps we can come up with a game plan of dealing with this issue.” 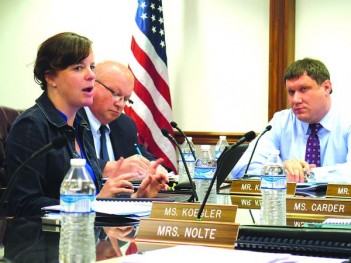 CHARLESTON, W.Va. — AARP has issued an advisory on a coronavirus call-in question and answer session on Thursday at…
byDon Smith