Testimony heard, no decision made in Nicholas consolidation lawsuit

The rule to show cause hearing concluded after about eight hours of testimony and Judge Duke Bloom asking attorneys to get transcripts of the previous state board meetings by July 21. He said these transcripts are needed to determine detailed findings and conclusions.

He also asked attorneys to prepare briefs by Aug. 4 and for anyone wanting to file responses to do so by Aug. 11. After that date, Bloom will look at the filings, consider testimony from Tuesday’s hearing and issue a ruling.

According to media reports, attorneys representing the Nicholas County Board of Education filed the lawsuit in Kanawha County Circuit Court against the state board and Schools Superintendent Steve Paine.

The lawsuit alleged Gov. Jim Justice and Paine worked to stop the consolidation plan and that the superintendent gave misleading information to the state board, according to media reports.

The lawsuit also alleged political pressure was placed on officials to deny the consolidation plan.

In a Monday state board meeting, members voted for a second time to reject the county board’s Comprehensive Educational Facilities Plan in which Nicholas requested approval to amend its 2010-2020 CEFP to close Richwood High, Nicholas County High, Nicholas County Career and Technical Education Center, Summersville Middle and Richwood Middle. The high school and technical center would be consolidated into a newly constructed comprehensive 9-12 high school at the beginning of the 2020-2021 school year. The middle schools would be consolidated into a newly constructed 6-8 facility at the beginning of that school year.

Richwood High and the two middle schools were destroyed in massive flooding that inundated many areas of southern West Virginia in June 2016.

At the start of Tuesday’s hearing, Bloom denied a state motion to dismiss the case. Both sides proceeded with testimony, most of which centered on whether the board could deny the CEFP if the county followed state policy in developing that plan. Testimony also focused on whether political pressure was applied to state board members to deny this plan.

Ken Webb, representing the Nicholas County Board of Education, called 16 witnesses, including several state and county board members.

Kelli Talbott, representing the state Board of Education called two witnesses, including Paine who had testified earlier that day.

Many of the state board members testified that the board has the authority to look at matters on a case-by-case basis instead of approving a plan only on the basis that it complies with a state board policy, referred to as 6204.

Paine said that the county met the minimum requirements under the policy. As an example, he said public hearings were conducted, but he felt that the board had to look at the quality of the hearings and what was said.

Paine said in most cases, the board has approved plans that have complied with policies, but said he believes it’s discretionary based on individual circumstances.

“My experience is the board, for the most part, considers those individual experiences and circumstances,” Paine said. “It’s not often, as has been pointed out, it has been approved in almost every single action.”

He said the board looks at unique aspects of each case and there are other factors to be taken into consideration, such as whether the schools are achieving well academically, which he said both Nicholas and Richwood were, and cases of financial savings. He said this would amount to about $350,000 in financial savings, primarily attributed to staffing.

State board member Debra Sullivan also testified that she did not believe there was enough public input.

“There’s a difference between listening and hearing,” she said. “I felt that the citizens speaking were not being heard.”

Sullivan based that observation on her view that there was little back-and-forth. She also said she felt residents’ questions were answered “tersely.”

Testimony also focused on whether political pressure was applied. Justice said in his State of the State that he is against consolidating schools and “hopes and prays that we end up in a school in Richwood.”

Beverly Kingery, a former state member, said in the past, if a CEFP met policy, the practice was to approve the amendment.

Kingery also testified that Campbell had initially asked her if she would like to be vice president of the state board.

She said she had received a call from the governor’s office previously, asking how she felt about the Nicholas County issue if it came before the board to vote. She later testified that she did not say how she would vote.

She said Campbell later called, telling her that after talking to the “administration” that they were not interested in her being in that position. She said she later felt that it would be best for her to resign.

Barbara Whitecotton, another former state board member, testified that she had emailed asking why the Nicholas matter was not on the state meeting agenda for a certain date. She later received an email from the state board secretary saying she had forgotten to send along a copy of the email sent to Nicholas County officials explaining why the issue would not be on the agenda. She said she later got an email from Campbell mentioning concerns the two would discuss the next week in person.

She said soon after, she received a call from another board member who had resigned asking her if she also resigned. She said she later learned through the media that her name had been withdrawn.

Nicholas County board members also testified. Board President Gus Penix said the CEFP was compliant with state policy and he was not asked to present anything in addition to that policy. He said since the Nicholas board already voted to move forward with that plan, it would be time consuming to re-do public notice, hearings and gathering information. He said they had looked at other plans all along and had put together a plan on what to do with the CEFP.

“It was a very thorough, thought out decision,” he said.

Penix said originally the deadline was in June but it was extended to December. If a plan is not reached by December, then FEMA will go under a traditional plan which means that they will build back the exact same schools. Penix said this is not what the board wanted to do and in his view is not in the best interest of the county.

Nicholas Superintendent Donna Burge-Tetrick testified that the board worked tirelessly to do everything right. She said time is still limited for FEMA funds because of the December deadline to submit the proposal for the scope of work. She said students are still in pods and the contract for those pods are for four years.

Talbott asked her if it took two months to get the last plan put together, if they could do that again in the case of an alternative plan. Tetrick said she and her staff have worked on the plan to the point of exhaustion.

“It’s taken me working around the clock to the point of exhaustion,” she said.

By ANDREA LANNOM The Register-Herald BECKLEY, W.Va. — President Donald Trump made his first official visit to the…
byDon Smith

The Associated Press shares 10 things to know Monday, May 5

By LORI KERSEY Charleston Gazette-Mail CHARLESTON, W.Va. — A bill that would have imposed an asset test on food stamp…
byDon Smith 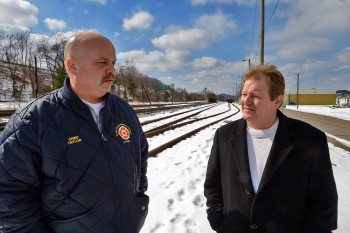