CHARLESTON, W.Va. — Members of the West Virginia Senate’s Select Committee on Tax Reform are rethinking their strategy after finding out their tax plan would likely cost the state more money than it would create.

The committee, set up by state Senate President Mitch Carmichael, R-Jackson, introduced a bill that would eliminate the state’s personal income tax and corporate income tax over the next few years. Those taxes would be replaced with a broad, 8 percent consumption tax, similar to a sales tax, that would cover most goods and services offered in the state. The bill would also remove many of the exemptions under the current sales tax.

Those who favor consumption taxes say they are far more stable than income taxes or other forms of taxation. But those who are against them say consumption taxes hit lower-paid workers disproportionately hard.

Committee chairman Sen. Robert Karnes, R-Upshur, has said the committee was shooting for a revenue-neutral bill, or one that might actually increase state revenue. But a budget analysis conducted by the state Department of Revenue suggests the state would end up losing more revenue than the proposed tax changes could bring in.

According to the revenue department, broadening and expanding the consumption tax to 8 percent from the current 6 percent sales tax could be expected to bring in an extra $1.3 billion to $1.35 billion a year.

But the loss of personal and corporate income tax collections would likely more than offset the extra revenue, the analysis suggests.

Department of Revenue staff found a similar financial impact from phasing out the corporate income tax.

“The cumulative revenue impact following the first four years of enactment would be a net General Revenue Fund decline of $870 million,” the Department of Revenue analysis concluded.

But Deputy Revenue Secretary Mark Muchow told members of the tax reform committee the bill might have other consequences as well.

“We would have the highest sales tax rate in the country if this bill takes effect,” he said. California has a sales tax of 7 1/2 percent, while West Virginia’s consumption tax would be 8 percent, Muchow said. If municipal tax rates allowed under home rule were factored in, the rate would be 9 percent.

Muchow suggested such rates could very well convince people who live in border areas of the state to take their business across state lines, and convince business owners to move.

Muchow said if he were a CPA in Parkersburg, which has a 1 percent municipal sales tax, he would have to charge is customers 9 percent in taxes on his services under the proposed legislation. “I may have to move to Marietta, Ohio,” he said.

Muchow also said he feared expanding the consumption tax to those who provide services like haircuts could drive many small businesses to an underground cash system. 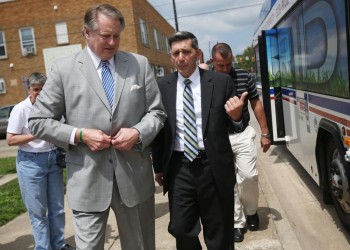 HUNTINGTON, W.Va. — The city of Huntington’s problems when it comes to drug abuse are not unique, according…
byBrian Canterbury

Coming to the Clay Center: Last chance to enjoy Shen Yun in Charleston

When large gatherings are banned, how do Appalachians keep the faith?