PARKERSBURG, W.Va.  — Officials announced Sunday a fire that has burned for more than a week at the former Ames shovel plant in south Parkersburg has been extinguished.

“Now we go into a 36-48 hour cool down period,” where the site will be monitored, Stewart said. “So we’re just sitting here looking at it with our fingers crossed that nothing starts smoking again.”

The fire began shortly after midnight on Oct. 21. The Camden Avenue plant, now owned by Intercontinental Export-Import Plastics, or IEI, was used to store plastics and other items which have not yet been identified.

The blaze sent a plume of smoke into the air which could be seen and smelled for miles. The past week, schools, county agencies and businesses closed as health officials warned people to stay indoors and avoid breathing the smoke. The cloud moved several times and intensified based on the weather. 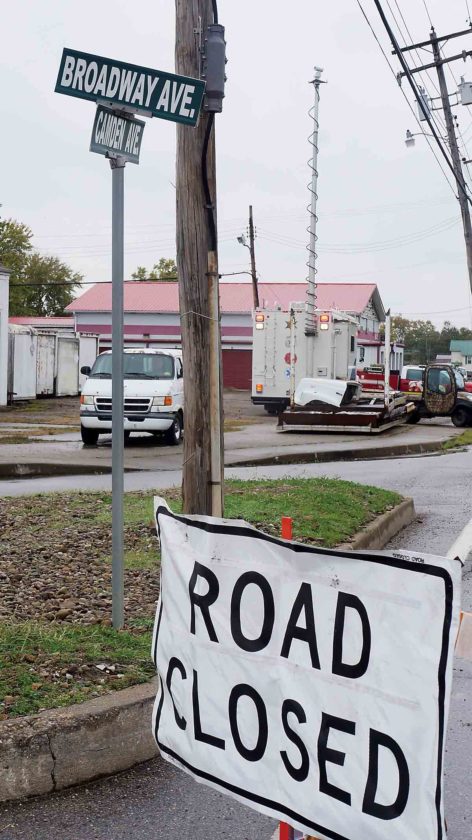 Large sections of road remain closed on Camden and Broadway avenues this week as crews monitor the site of the old Ames shovel plant in south Parkersburg which burned for more than a week. (Photo by Michael Erb)

Crews began tearing down and removing some equipment Sunday. More than a mile of hoses trailing to pumps at the Little Kanawha River were starting to be removed Sunday as well, down from five lines to three.

“We’ll leave some of those going just in case something flares up,” Stewart said.

Several people remained on scene Sunday, with two people at the mobile command center and crews from SPSI contractors from Pennsylvania beginning to move heavy equipment off the site. Toxicologists from the Center for Toxicology and Environmental Health, or CTEH, and the West Virginia Department of Environmental Protection also remained on site to continue air quality testing.

Officials have struggled to find out exactly what was stored at the plant. A materials safety data sheet for the site was out-of-date and officials doubted its accuracy. Documents on items in the plant were believed destroyed in the fire, they said. 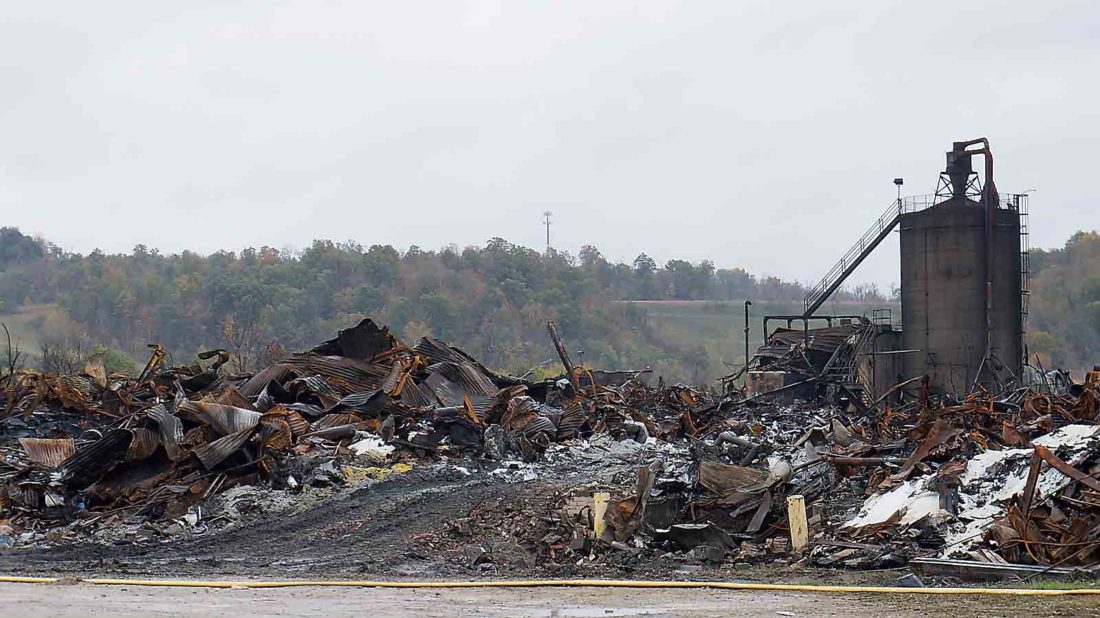 Emergency responders announced Sunday a fire that has blazed for more than a week at the IEI Plastics warehouse on Camden Avenue is finally out. Crews will remain on scene for 36-48 hours to observe the site and make sure no areas reignite. (Photo by Michael Erb)

The WV DEP sent a compliance order Thursday to Intercontinental Export-Import Plastics demanding an inventory of the warehouse. Officials said information provided after the fire first began was out-of-date and believed to be inaccurate.

Lawrence Messina, director of communications for the West Virginia Department of Military Affairs and Public Safety, said information was submitted Sunday and is being reviewed.

“They received information this afternoon and the DEP is in the process of determining if it fits the information that was required,” he said.

Messina said officials will meet with the Wood County Commission at 9:30 a.m. today to give updates on the fire and IEI’s response to the compliance order.

Maintenance crews at Wood County Schools have been working since Friday to replace filters at the district’s 27 public schools and numerous other facilities. Students throughout the county will return to classes this morning after being off all last week due to air quality concerns. The district hired CTEH to do air quality surveys of its facilities and on Friday all came back clear.

Stewart said buildings near the site are still open and can be accessed through alleyways. Crews cleaned up debris and equipment from properties that face Camden Avenue, he said.