BLUEFIELD, W.Va.  — With a current population of 10,477 citizens, officials in Bluefield are counting on a positive 2020 U.S. Census report.

The city must maintain a population of more than 10,000 citizens to retain its class two municipal designation.

In what was the first meeting for new Bluefield Mayor Ron Martin, and newly elected board members Rob Williams and Matt Knowles, a primary focus of discussion Tuesday dealt with citizen participation in the upcoming U.S. Census count.

Annette Brichford, a recruiter and field manager for the U.S. Census Bureau, said the final 2020 Census will impact everything from how many congressional seats West Virginia will have in Washington to the amount of federal money that Bluefield will receive.

“But probably what is of the most interest to the city of Bluefield and the residents here in the county and the state is that there is over $4 billion in federal money that is available,” Brichford said. “From what I can tell and what Mr. (Dane) Rideout said there was an undercount (in 2010). I spoke to the Princeton City Council and Bluefield about 2010. So your government agencies didn’t receive the money they could have had there been a more accurate count. Part of the reason I’m here today is to encourage the city as well as all residents to cooperate with the census. Not to turn away the census workers if they come to your door or give you a call.”

Brichford said more than 100 census employees are already working in a nine county region, including Mercer, McDowell, Monroe, Summers and Wyoming counties, as part of an address canvassing operation that must be completed in advance of the actual 2020 count.

“This is an important piece for the city,” Rideout, the city manager, said. “Our class status, a class two city, there is a lot that comes with that. This is something the public needs to participate in. Any public that is out there needs to please take this serious because this has ramifications that we will live with for the next 10 years.”

In other action Tuesday, Martin, as the city’s new mayor, encouraged the board and citizens of the city to “dream big.”

“We need to dream big,” Martin said. “There is nothing to be gained for us if we think small. We have so many things in the city that I think we can expand upon. I applaud the board prior to ours for getting us on this course. And look forward to this board hopefully bringing some new things to fruition.”

Martin said the existing leadership team in the city did a good job of ensuring a smooth transition for the new board members.

“I appreciate the citizens putting their trust in us,” Martin said. “I appreciate the leadership of the city management group. You guys have done a fantastic job of getting us ready. I feel like we are on a good track.”

“I would like to thank our veteran leadership on the board, and notice I didn’t say senior, in helping us through our first meeting,” Knowles added. “You guys have been very helpful and I look forward to working with you.”

“I would second that,” Williams said. “It is a great honor to serve the citizens in the city.”

In other business Tuesday, Rideout said the tentative agreement reached between the city and K-VA-T Food Stores, Inc. is still being finalized, and is not yet available for public inspection.

The settlement agreement deals with the old Kroger building on Cumberland Road that is currently leased by K-VA-T, but is still vacant.

K-VA-T leased the store, located in the Bluefield Shopping Center, in 2012 after the Kroger closed. The lease was recently renewed automatically, but the property has remained vacant. The city filed a lawsuit in August 2016 against K-VA-T seeking $37,000 as the result of a new ordinance requiring that any building that has been vacant for at least 180 days to be inspected. The inspection costs $1 per square foot, so the city was seeking a sum covering the fee for the 36,724 space.

“This thing is still stuck between the two attorneys,” Rideout said of the tentative agreement. “The details of that are still being codified in a formal document that has not been completed yet.”

City Attorney Colin Cline said the tentative agreement was reached six weeks ago. He said the court challenge has cost the city $29,500 in attorney fees to date and $200 in actual filing costs.

“It’s been six weeks since that settlement agreement was actually reached and announced for the court,” Cline said. “Speaking for myself, I’m a little frustrated that we haven’t received a draft.”

In other action, Rideout said 41 code violation cases have been worked in the last two weeks, including two pit bull cases and a dog rescue. He said more than 20 structures in the city are still scheduled for demolition. Rideout said a new effort also is being launched to address vacant properties in the city.

Jim Spencer, the city’s community and economic development coordinator, asked the board for permission to enter into an agreement with CGI, a company that will produce high-quality videos for the city at no cost. Spencer said the Mercer County Commission is already working with the agency.

The city was awarded a $2 million federal EDA grant for the Commercialization Station project earlier this year. The grant funding was included in the POWER initiative, a federal strategy to help communities struggling to cope with the impact of the loss of coal-related jobs.

The planned upgrades for the Commercialization Center, which is located at the site of the old freight station on Bluefield Avenue, include electrical upgrades, new lighting, doors and windows, among other improvements in the 60,000-square foot facility.

Art Riley, head of the Downtown Merchants Association, asked the board when construction would begin.

“But Mr. Riley, I understand a lot of that work is inside so the weather won’t impact construction,” Williams said.

The board also approved a contract Tuesday with Southern Paving for additional street pavings in the city. Martin asked Rideout if he could explain to the public the process of how streets are selected for paving.

“We break the city down into different quadrants,” Rideout said. “We want to make sure we are paving in different parts of the city. Anytime you go on the Fix-It Bluefield (app) and have a pothole, we take that data and combine that data. So there is a lot of work that goes into the streets.”

Gibson said the city will be working more closely with the various boards and commissions in the future, and will be seeking additional information on their individual plans for the city.

“You heard us talk on and off throughout the years about city commissions and boards,” Gibson said. “And I’m going to go through and name the city boards and commissions in existence now and encourage you, if any of these peak your interest, to contact someone here and put your name in the running. You might be selected.”

Breeders Bill back In focus

By JOSELYN KING The Intelligencer and Wheeling News-Register WHEELING, W.Va. — A bill to eliminate the West Virginia…
byDon Smith 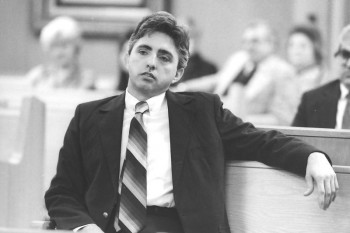 Victims unnerved by ruling that could free ’89 killer