Lawmakers, others debate the pros, cons of Constitutional Convention

CHARLESTON, W.Va. — On Feb. 10, the West Virginia Senate split along party lines to vote in favor of Senate Concurrent Resolution 3, a resolution calling for states to request a constitutional convention under Article V of the United States Constitution.

The text of the two-page resolution is identical to resolutions being pushed or about to be pushed in dozens of state legislatures. It starts with a simple request, “Urging Congress to call a convention of the states, under the authority reserved to the states in Article V … limited to proposing amendments to the Constitution of the United States that impose fiscal restraints on the federal government, limit the power and the jurisdiction of the federal government and limit the terms of office for its officials and for members of Congress.”

The men who wrote the Constitution in 1787 provided two ways to amend it. One was for Congress to propose amendments. The other was for states to call for a convention and propose their own amendments. In either case, the proposed amendments would need to be ratified by three-fourths of all the states in order to become part of the Constitution.

But while Congress has proposed hundreds of constitutional amendments over the years, in the entire history of the nation, a convention of states under Article V has never been attempted — until recently.

“There are all these different groups (attempting to call Article V conventions),” said Ted Boettner, executive director of the left-of-center West Virginia Center on Budget & Policy, a Charleston-based policy think tank and research group. The Center on Budget & Policy has written a 10-page policy paper warning of the possible dangers of a convention of states.Last year, the American Legislative Exchange Council and other conservative organizations pushed an Article V convention to propose a balanced budget amendment to the Constitution. In all, 28 states, including West Virginia, signed on.This year’s Article V call for a proposed amendment to limit terms and rein in the federal government is being championed largely by the Convention of States Project.

“The Framers of the U.S. Constitution knew that a possibility existed that the original amendment process might not be sufficient,” West Virginia Convention of States Director Barbara Thomas wrote in a letter to West Virginia delegates, urging them to go along with Senate Concurrent Resolution 3. “Washington could conceivably come to a point where it would not propose amendments to limit its own power.

“Whatever your party affiliation, participation in such an event would be momentous, historic and serve to return the balance of power between the states and the federal government, as well as within the branches of the federal government itself, restoring the bounds intended by the Framers for the benefit of the American People,” Thomas wrote.

But Sen. Greg Boso, R-Nicholas, disagrees. Boso is one of the sponsors of Senate Concurrent Resolution 3 and a supporter of calling a convention of states.

“(Article V) is in our Constitution for a reason,” Boso said. “We’ve got a situation where we want to make sure our federal government is doing what it’s supposed to do.”

Even if a convention of states does not come to fruition, Boso said the mere fact of a number of states asking for one can serve as a wake-up call to Congress that federal lawmakers are becoming unresponsive to the needs of the people.

“It is the best way to restore the power to the states that the federal government has usurped from us,” said Thomas.

But how would a convention of states work?Thomas, who lives in Hedgesville, said legislators in 34 states first would have to pass resolutions asking for one. Then representatives from all 50 states would come together to discuss proposed amendments.In theory, amendments discussed at the convention would be limited to a single topic, or just a few. If delegates to the convention of states could agree on the text of the amendments, they would still need to be ratified by three-fourths of the states, or 38 of 50.

But Romano, Boettner and other opponents of an Article V convention fear it wouldn’t work that way in practice and are afraid a group of rogue legislators could hijack the convention and gut the Constitution.

“These folks come in and speak with confidence about how an Article V would take place, but nobody knows how it might transpire,” said Boettner. “A convention could easily turn into multiple issues and completely rewrite the Constitution.”

“That is just fear-mongering,” said Thomas. “The states tell (the convention) what they can and can’t talk about. It’s not germane if it goes outside the scope. All you have to do is say it’s out of order and it stops.”

Thomas said there are sufficient checks and balances built into the convention of states process to avoid hijacking a convention.

“It’s very difficult to get 34 states to agree to the same purpose,” she said. “Congress has proposed over 400 amendments. None of them, other than 27, has ever made it through (three-fourths of) the states (for ratification).”

Thomas said the framers of the Constitution made it hard to amend the document on purpose. 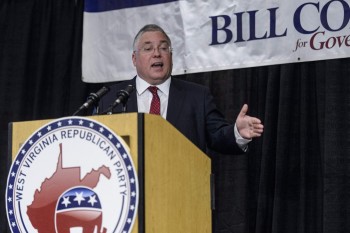 CHARLESTON, W.Va. — After one of the state’s most expensive campaigns this election cycle, Republican Attorney General Patrick…
byBrian Canterbury