BLUEFIELD — While the Mercer County School System is preparing to go to court over its Bible in the Schools program, a bill continues to work its way through the state Legislature making a version of the class an elective in all school divisions.

House Bill 2073, which was first introduced by Del. Ralph Rodighiero (D-District 24) in 2015, has once again made its way to the House Education Committee, the same fate it has met the last two years.

The bill calls for “making available, as an elective course of instruction, the history of the old and new testaments of the Bible.”

It proposes to amend the Code of West Virginia under required courses of study (Article 2), but schools would only be required to offer it as an elective, not a mandatory course.

Currently, there is no provision to require school systems to offer a course on the Bible.

Del. Marty Gearheart (R-District 27) said he is not familiar with the bill, and he is not sure he would support it.

“I am in favor of school systems having the right to offer the course if they need and want it,” he said. “It has been important in Mercer County and the general public has ponied up to do that.”

Gearheart said he is “all for” the program, but is concerned it could become an unfunded mandate if school systems are required to offer it.

“I think it’s a good idea to include the classes in schools, but I’m not sure I would be in favor” of requiring schools to offer them, he said.

Rodighiero could not be reached for comment on the bill, but said in an article in the Washington Free Beacon in 2015 that this is the Bible Belt and the “history of the Bible is fact—it’s factual history. Why not have that as an elective, something as popular as the Bible? A child should have a choice about what they want to learn about in their history class.”

Rodighiero also said if it does not make the agenda in this (2015) legislative session, he will “try it back again a year from now,” which he did in 2016 and again this year.

“I believe that too many parents are failing in providing for their children’s spiritual development,” he said in that 2015 article.

But it is the point related to “spiritual development” that is one of the issues in the lawsuit in Mercer County.

It is not illegal to teach Bible in the schools, but as it relates to history and its literary impact, not as a religion.

The lawsuit, filed last month in U.S. District Court in Bluefield by the Wisconsin-based Freedom From Religion Foundation Inc., contends even an elective course on the Bible creates an atmosphere of ostracism for children whose parents choose for them not to take the course and the classes in Mercer County are being taught like a “Sunday school class,” not in historical and literary contexts.

“The program endorses one religion, improperly entangles public schools in religious affairs, and violates the personal consciences of nonreligious and non-Christian parents and students,” the lawsuit states.

Although the Mercer County Board of Education administers the Bible in the Schools program, it is funded by donations at a cost of about $450,000 a year.

The Bible in the Schools organization has contended the program is in compliance with the law. About 4,300 students in 19 Mercer County schools take the class.

Last week, the Mercer County Board of Education hired two law firms to represent the school system in that lawsuit.

After an executive session, the board voted unanimously to hire the First Liberty Institute, based in Plano, Texas, and O’Melveny & Myers LLP, based in Los Angeles.

First Liberty Institute is the largest non-profit law firm in the nation dedicated exclusively to protecting religious freedom for all Americans.

By James A. Haught Editor Emeritus The Charleston Gazette-Mail West Virginia is covered by hardwood forest more than…
byDon Smith 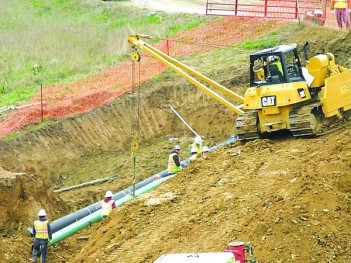