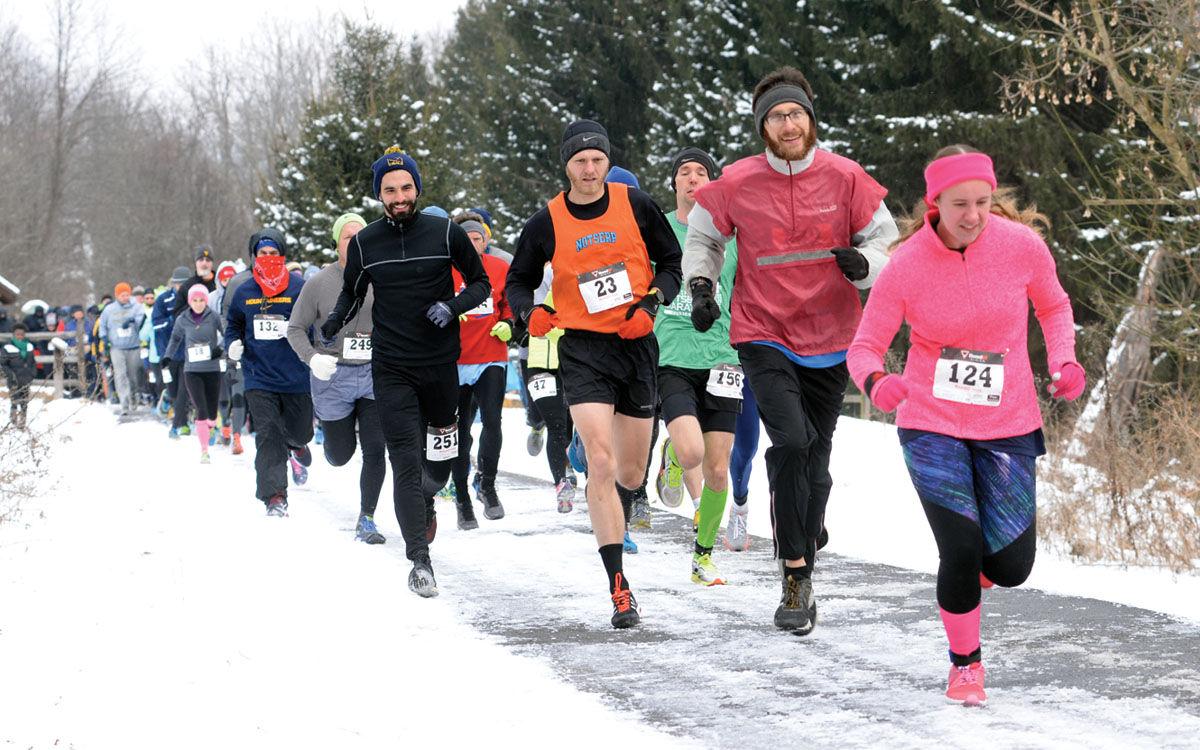 Hundreds of runners start on their 13.1-mile journey, despite brisk weather, during the 12th annual Run to Read half-marathon held at Pricketts Fort Saturday afternoon.
–
To see more photos, click here.
FAIRMONT, W.Va. — Despite frigid temperatures in the teens, hundreds of runners gathered at Pricketts Fort State Park for the 12th annual Run to Read half-marathon Saturday afternoon.
.
Runners came from as far away as Colorado, as well as a few eastern and southern states, Ohio, Maryland, Pennsylvania, Tennessee, New York and New Jersey.West Virginia residents from across the state also participated in running 13.1 miles.Racers were from 14-70 years old.
.
The participants ran on two certified trails which bordered the fort. The trails were still dusted with snow from the area’s previous snowfall, making it more of a challenge for runners. The trails consisted of a pavement and finely crushed gravel.
.
At 1 p.m., runners took their mark on the trail across from the visitor’s center for two miles of the marathon.Once the two miles were completed, runners turned around to finish the marathon on the trail that overlooks the Monongahela River.
.
Awards were presented to the top runners of the half-marathon.According to Run to Read director Scott Ridenour, the top three overall runners included Matt Bright, 30, with a time of 1:17:45; Levi Foust, 35, with a time of 1:18:49; and Clayton Lunsford, 17, with a time of 1:24:44.
.
The top female runner was Jenny Murtha, 19, with a time of 1:41:21; second place female runner was Olivia Underwood, 17, with a time of 1:41:32. Ashton Horsely, 18, took third-place female runner with a time of 1:42:00.
.
Run to Read benefits the Literacy Volunteers of Marion County (LVMC), which provides one-on-one tutoring to adults and children in reading, math, English as a second language and GED preparation.
.
According to the LVMC website, one in five adults in Marion County cannot read at a fourth-grade level.
.
Email Sarah Goodrich at [email protected]