Greenbrier County to be home of whiskey barrel manufacturer

CHARLESTON, W.Va.  — A new facility making whiskey barrels out of West Virginia white oak is expected to be operational and making barrels by the end of the first quarter of 2019.

Tom Crabtree, one of three principals in the yet-to-be-built Great Barrel Company near White Sulphur Springs, said construction on the $27 million project is expected to begin in early 2018.

Crabtree said he was having dinner one evening with owners of the Smooth Ambler Spirits distillery in Maxwelton when discussion turned to the fact that West Virginia’s timber had to be carted off to another country, cut up, milled and returned to the United States before it could be made into whiskey barrels.

Crabtree and his partners wondered why the timber couldn’t be harvested and turned into barrels right in Greenbrier County.

Crabtree said the new barrel-making facility will harvest about 12 million board feet of white oak a year, or about 6 percent of the state’s current total output. He plans to make 700 whiskey barrels a day once the plant is up and running.

Crabtree said the whiskey industry is growing by about 7 percent a year, and industry experts expect a barrel shortage within a few years. Crabtree said distillers will be looking for as many barrels as they can get.

He expects the barrel plant to contribute about $50 million a year to the state economy.

State Commerce Secretary Woody Thrasher, who has been working with Crabtree on the project, said the plant will create 113 jobs, plus ancillary jobs for the timber industry. The barrel plant jobs will pay at least $40,000 a year.

“These are real jobs,” Thrasher said. “These are good jobs.”

The $27 million investment includes a $6 million loan from the state Economic Development Authority, said EDA Executive Director David Warner. Another $6 million will come from a bank loan to the company.

Crabtree said $22 million of the money will go to buy state-of-the-art equipment for making barrels.

Crabtree presented a video during Thursday’s press conference demonstrating the equipment that will be used in the Greenbrier County facility and showing how it is used to make and char barrels.

He said the barrel facility will take up about 22 acres of a 44-acre site along Harts Run.

He also said a portion of the barrels made at the facility will go to Smooth Ambler.

Throughout his campaign for governor and after taking office, Justice said West Virginia has a vast timber industry waiting to be tapped. He said the barrel-making facility is one example of how West Virginia timber can be used in West Virginia. 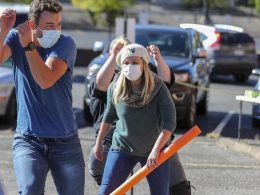 The Dominion Post MORGANTOWN, W.Va.  — It was promoted as “One Day to Give Back” and supporters of…
byDon Smith

CHARLESTON, W.Va. — The office of the Governor of West Virginia has issued the following media advisory: WHO: Gov. Jim…
byDon Smith